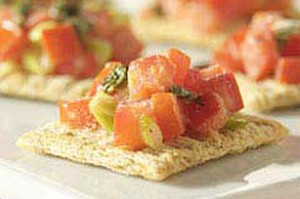 Steve’s breakdown: All this account movement at Kraft could mean this is not the last brand to go into review. Get in there now and you’ll at least be ready for the next one.

NORTHFIELD, IL: In yet another agency shakeup at Kraft Foods, the marketer has put the Triscuit creative account into review, according to people familiar with the matter. Incumbent Euro RSCG, New York, is not expected to defend.

A spokesman for Euro said it will continue as the digital and social media agency of record for the brand, but directed further questions to Kraft. Kraft declined to comment.

Euro has had the Triscuit account since 2007; it picked up Ritz and Toasted Chips in the same review. Other agencies on the Kraft roster include Dentsu’s McGarryBowen, Interpublic Group of Cos.’ DraftFCB, WPP’s Ogilvy & Mather and MDC Partners’ CP&B.

Kraft has made numerous agency shifts over the last two years. On Wednesday, the marketer had awarded WPP’s Taxi the account for liquid water enhancer Mio, its “biggest new product investment in a decade.” Still in review are A1 Steak Sauce and Bull’s-Eye barbeque sauce, which had been handled by DraftFCB.

Triscuit, by Kraft’s Nabisco unit, is the fourth-largest cracker brand with 6.0% share, according to SymphonyIRI. Sales increased 3.1% in the year ending April 17 to $245 million. The category leader is Cheez-It, by Kellogg Co., which commanded 8.37% share and whose sales increased by 1.6%, according to SymphonyIRI. Kraft in 2010 spent about $8 million in measured media on the Triscuit brand, just under 1% of Kraft’s total measured media spending for the year, according to Kantar.