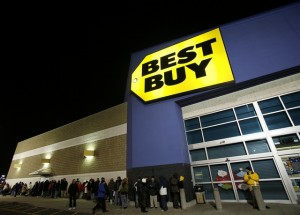 Steve’s breakdown: It’s being reported this review is for radio, email and direct mail services so if that’s your bag in the retail sector, there could be a chance to get included in the pitch.

According to several people familiar with the situation, the retailer this week circulated a request-for-proposal document that is understood to encompass integrated marketing duties, including digital marketing, social media, broadcast and print. “This is part of our regular business review, designed to supplement our current agency relationships,” said Best Buy spokeswoman Lisa Hawks, declining to elaborate further.

Best Buy ranks as the 62nd-largest advertiser with more $555 million in U.S. ad spending, including both measured media and unmeasured media, according to Ad Age’s Datacenter.

CP&B — which is among the list of agencies at various holding companies to have received the RFP from Best Buy — said the review doesn’t affect its business with the retailer. According to CP&B President and Partner Jeff Steinhour, the document that made the rounds this week is a “RFP for additional services” and the agency’s “core business is not affected.”

“They had an in-house agency group called Yellow Tag for many years that handled radio, email and direct mail, and this is an RFP for those kinds of services … things that were previously handled in-house that they are now looking for a partner for,” Mr. Steinhour said. “They have sent it out to all their roster agencies plus other agencies.” According to him, shops have until Monday to respond, and CP&B plans to throw its hat in the ring. “There are some things on there we would love a shot at.”

To Ad Age’s understanding, there are no plans to dismantle Yellow Tag, the in-house marketing operation that Best Buy has been investing more in over the past couple of years.

That Best Buy is once again looking at agencies other than its lead shop CP&B is noteworthy considering the retailer in November consolidated its media-planning and -buying account at Publicis Groupe’s Starcom. The account was previously split, with Starcom managing buying duties, and CP&B leading media-planning.

CP&B recently picked up marketing duties for Coca-Cola’s Vitamin Water, but that was a small consolation to the loss of its key client Burger King after a seven-year relationship. The potential entry of more agencies onto Best Buy’s roster could also be a concern for the shop.

In the U.S., Best Buy’s marketing is now run by Drew Panayiotou, who joined the company in January 2010 and has been at the center of several turns in the retailer’s media strategies. Best Buy has been shifting more money into TV, for example, including a first-ever Super Bowl buy this year. Mr. Panayiotou reports to Barry Judge, Best Buy’s chief marketing officer.

The company has nearly 1,100 stores, based on its most recent annual report, filed at the end of April; that figure is up 31 stores over fiscal year 2010. The retailer reported a 0.3% revenue decline in fiscal 2011, which it attributed to weak consumer spending and shifts in consumer demand for new tech products.

“We believe the revenue decline resulted primarily from a combination of weakness in several key consumer electronics industry product categories and a decline in our estimated domestic market share,” the company said. “Consumers continue to be highly selective and cautious about how and when they make consumer electronics purchases. As a specialty retailer in the consumer-electronics industry, the adoption of new technology and the timing of product life-cycles continue to play an important role in revenue trends.”