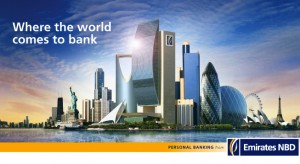 Steve’s breakdown: Seems the big media networks are on the prowl on this one but there’s still time to get in the mix.

DUBAI, UAE: Emirates NBD, the UAE’s biggest lender, has called a review of its media buying and planning account.

The review is in the very early stages and is understood to involve most of the major media agency networks, including incumbent MEC. The pitch follows last year’s creative review, which was eventually won by FP7. The agency was tasked with handling brand custodianship, as well as delivering the communication requirements for all banking products and services. The bank’s public relations account is handled by Asda’a Burson-Marsteller, which is not affected by the review.

The bank is the largest in the UAE by assets and was formed in October 2007 following the merger of Emirates Bank and the National Bank of Dubai. In October it was announced that the bank was to take over struggling government-controlled Islamic lender Dubai Bank following directives from the Dubai government. The government holds a 55.6 per cent stake in Emirates NBD.

No one at Emirates NBD was available for comment.