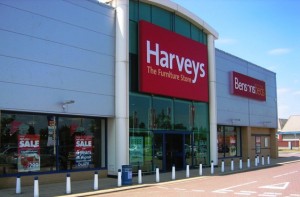 Steve’s breakdown: This review is being handled by AAR so hopefully they already have your credentials in house. Harvey’s has over 150 stores throughout the UK and is the #2 chain in it’s market.

THURROCK, UK: Harveys, the furniture store, is on the hunt for an agency to handle its $24 million advertising account.

The company has kicked off a review of its creative business in a process handled by the AAR, as it aims to move to more creative and planning-led advertising.

Harveys, which has sponsored ITV’s Coronation Street since 2007, currently uses the production company Velvet to create the idents that run with the programme.

The store also works with Omnicom-owned production company Hub Plus which produces print and press ads for the store.

Harveys is aiming to ramp up its advertising in order to build its brand in the face of strong competition from rivals such as DFS, which currently spends $141 million on above-the-line advertising.

The current Coronation Street idents, by Velvet, feature an ornamental dog transformed into a real dog and running over to its owner who is seated on a sofa.

Previous idents for the soap opera included spots featuring household objects, such as flying ducks, an action figure, an ornamental Buddha and a rag doll, coming to life to watch Coronation Street .

Harveys is wholly owned by German furniture group Steinhoff International and claims to be the largest furniture specialist in the UK with over 150 stores.

Starcom MediaVest Group handles media planning and buying for Harveys but is unaffected by the ad review.