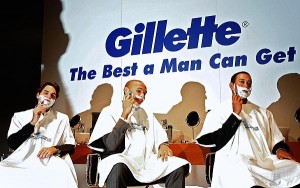 Steve’s breakdown: A) This may be a long shot because they might have decided on the final list of shops but that doesn’t mean to back off if your shop can beat them in a shoot out. B) Do you think it was Porter who chose Tiger to represent?

BOSTON, MA: After more than 20 years at Omnicom Group’s Porter Novelli, Procter & Gamble is considering other agencies to handle public relations for Gillette.

Porter Novelli — which referred calls for comment to P&G — is expected to defend the account. People familiar with the pitch say Porter will face off against a quartet of agencies that are a mix of roster and non-roster shops. P&G spends an estimated $4 million to $6 million on PR for its Gillette brand.

It’s an unexpected move for a company that rarely moves business outside its U.S. PR roster, which includes Publicis Groupe’s MSLGroup and Interpublic Group’s DeVries, as well as independents Paine PR, Taylor and Marina Maher Communications.

“We are undertaking a review of our global PR efforts on Gillette to ensure we continue to field the growth of the world’s largest grooming brand and make sure we meet the constantly evolving needs of our male grooming business,” said Damon Jones, global communications manager of male grooming at P&G. “PR is a critically important part of our mix and ensuring we have the right capability in place, as we do across all communications disciplines, is an ongoing effort.”

The move also comes under new marketing leadership for Gillette. Ad Age reported in May that James Moorhead, the marketer behind the popular Old Spice work, would move to associate marketing director on the Gillette brand. And it follows one of Gillette’s most expensive product launches — and PR campaigns — last year for its Gillette Fusion ProGlide product, named to Ad Age’s America’s Hottest Brands List in 2010.

The agency selected in mid-October will be tasked with global PR strategy for Gillette. However, it’s understood that the review won’t affect regional PR accounts outside the U.S.: Omnicom’s Ketchum in Germany, Interpublic Group’s Weber Shandwick in India and WPP’s Hill & Knowlton in the U.K. Porter Novelli will continue to work with the company in China, Latin America and various European locations.

Omnicom creative shop BBDO serves as the lead agency on Gillette, adhering to P&G’s brand agency leader (BAL) structure. Within this structure, social-media duties for Gillette are handled by its PR firm in the U.S.

For Porter, the review follows a round of layoffs of at least a dozen execs in New York and Chicago over the past few months, including staffers who had worked on the P&G account.

The potential loss it faces now could be its second blow on the Gillette brand; about two years ago, the agency lost a chunk of its Gillette account when P&G separated the brand’s male and female categories. The company moved Gillette’s Venus from to Marina Maher Communications and left Porter Novelli with the Gillette men’s grooming products.

Losing the marquee client would leave Porter Novelli U.S. with the Braun account — a comparative sliver of P&G business compared to the multiple brands that sit within other U.S. PR firms.

According to Ad Age’s Datacenter, P&G was the largest national advertiser in 2010, with domestic spending over $4.1 billion. Of that, about $185 million was devoted to marketing the Gillette brand, vs. $36 million for Old Spice.