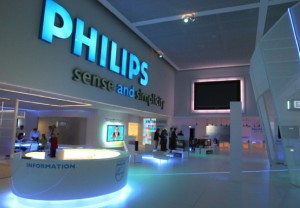 Steve’s breakdown: Back in March we reported Philips had called $100m global digital pitch and now this. Good luck to those who have the juice.

AMSTERDAM, Netherlands: Electronics giant Philips is conducting a global review of both its media and creative assignments, the company confirmed today.

In the U.S. alone, the client spends and estimated $350 million on ads.

Carat is the client’s media agency of record, while DDB is the creative agency of record, a Philips rep confirmed. Asked for comment, a Philips rep replied via email that “the process was started to review requirements and solutions suiting Philips growth strategy and objectives. Reviewing the relationship with our agency partners is basically part of normal business procedure.”

The company hopes to have the process wrapped up by October, the client rep added.

Philips last reviewed its media assignment in 2007, when Carat successfully defended the account. Omnicom’s DDB won the creative account in 2003.

For Carat, Philips was one of two clients revealing global media reviews Tuesday. The other was Marriott, where the Aegis Group shop is the U.S. incumbent.

That said, Carat has had a pretty good run on the pitch front the past year. Earlier this year, it won a piece of Disney’s $1 billion media account. Last year, it retained its Pfizer assignment, and added Smucker ($125 million), Beiersdorf ($100 million), Red Bull ($50 million) and Relativity Media ($200 million) to its roster. In the loss column last year: RadioShack, Alberto Culver and Revlon, worth about $350 million in combined overall media spending.

At press time, the agencies hadn’t responded to requests for comment.