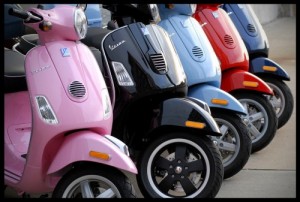 Steve’s breakdown: The brand is in for a complete revamp and image makeover. And talk about a sexy brand! If you’re in the neigborhood of Maharashtra, go for it!

MAHARASHTRA, India: It has been learnt that Vespa Scooters, the two-wheeler product from the stable of the Italian company Piaggio, is looking for a creative agency in India. The pitch was initiated around a couple of weeks back. The process is being driven from Pune.

Although official confirmation on the creative pitch could not be fetched from the authorities at the time of filing this report, highly-placed sources in the advertising industry close to the development, have confirmed the news to afaqs!.

Sources further inform that the creative pitch is in sync with Vespa’s plans to venture into the Indian scooter market soon. Interestingly enough, this market is far from unfamiliar territory, as the scooter brand Vespa has competed here several times in the past.

Specifically, the Vespa has been associated with strong Indian companies such as the Firodias and Bajaj Auto in the 1960s, and later with LML (Lohia Machines Ltd), in the 1980s.

The brand is now slated to undergo a complete revamp and will be re-launched with renewed vigour in the months ahead.

In the past, the Vespa has been associated with style and modernity. It remains to be seen how the winning creative agency will help the Vespa position itself in today’s competitive two-wheeler market in India.