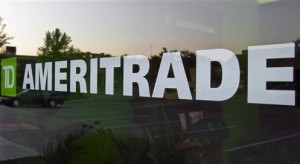 Steve’s breakdown: Here’s one we didn’t just call but asked for back in April. Hopefully you all took notice and already have credentials over there. If not, maybe now you’ll listen . . .

There are two separate articles presented below.

Ogilvy, whose roots with the company date back to Ameritrade in 1997, plans to defend. The agency, which handles the account out of its New York office, declined to comment.

A TD Ameritrade representative confirmed the review, but declined to discuss the process, including the company’s timetable for completing it. The company is based in Omaha, Neb.

OMAHA, NE: TD Ameritrade has launched an agency review, and is out talking to shops about creative duties on its nearly $300 million account, industry executives say. The longtime incumbent shop for creative work is WPP’s Ogilvy.

“We work with a number of agencies, and reviewing our agency partners is part of our normal operating practices,” a spokeswoman for the company told Ad Age. “We are doing a review of Ogilvy right now, but again that’s just part of our normal procedure.”

According to representatives for Ogilvy, the agency plans to defend the business.

TD Ameritrade Holding Co. spent $334 million on measured media, with the bulk — $287 million — devoted to marketing the company’s brokerage business, according to Kantar Media data. Much of that work is direct and online marketing initiatives.

Ogilvy was responsible for the popular ad campaign that broke a decade ago called “Let’s Light This Candle” for Ameritrade in which a young office geek is asked by his older boss to help him learn how to trade online.

In 2006, Ameritrade acquired TD Waterhouse from the TD Financial Group, creating the TD Ameritrade brand. In fiscal year 2010 it had net revenue of $2.6 billion and it places an average of 379,000 trades a day, according to the company.