Bud Light Platinum: What more do we need to say?

Home Industry: Booze/Beer/WineBud Light Platinum: What more do we need to say?

Bud Light Platinum: What more do we need to say? 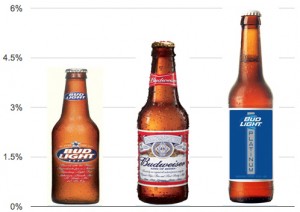 Steve’s breakdown: As we reported back in August, Bud Light is in play. But this might be a whole new ball of wax and probably a Super Bowl ad. No mention to who’s in the mix to handle the biz but it goes on the shelves in January. BTW: as you can see, you’ll get a buzz faster with Platinum.

AB InBev, the maker of Stella Artois and Budweiser, said Bud Light Platinum will have a slightly sweeter taste with a higher alcohol volume of 6%, compared with the 4.2% for Bud Light. The company said details on the marketing campaign to support Platinum’s rollout will be provided later.

“There are opportunities for light beer to expand into new occasions, and we think Bud Light Platinum is the beer to take us there,” said senior director Mike Sundet in a prepared statement.

Stifel Nicolaus analyst Mark Swartzberg told Dow Jones AB InBev was hoping to use the company’s scale as the world’s largest brewer to get the product exposure to social scenes where beer doesn’t have much presentation.

He said the launch of Platinum, which is expected to hit shelves at the end of January, is a sign the company is more committed to addressing the challenge that spirits has presented to beer.

“It also reflects that Bud Light, as far as brands are concerned, is their No. 1 priority,” said Swartzberg.

The launch comes has growth opportunities for premium light beers remains limited due to the industry’s size and some alternatives, including wines, spirits and malt beverages.