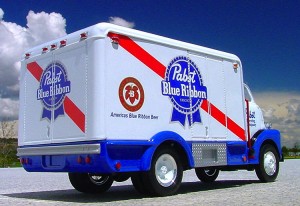 Steve’s breakdown: We’ve been writing a lot about Pabst since the Metropoulos family took over. The Colt 45 Blast debacle and the new CEO & COO announcements are two stories we covered. Though they have had a few missteps, this move could be the moment they finally settle down and get to work marketing their huge portfolio of 31 beer brands.

LOS ANGELES: CA: Irony-loving hipsters in Los Angeles, grab a Pabst and give a toast to the maker of one of your favorite beers.

In moving its headquarters to L.A. this summer from a Chicago suburb, Pabst Brewing Co. will bring one of the older brands in the business to a bruised California that has seen quite a few corporate head offices flee the state.

The company, purchased last year for about $250 million by billionaire investor C. Dean Metropoulos, declined to comment about the reasons behind the move or how many local jobs it might create.

Pabst spokesman Mark Semer said that Metropoulos’ two sons, Daren and Evan, both live in Los Angeles and run the company with their father, who lives in Greenwich, Conn.

Pabst was owned for about two decades by the charitable foundation of the late Los Angeles brewing mogul Paul Kalmanovitz. The Internal Revenue Service ordered the Kalmanovitz Charitable Foundation to sell the company because a federal law barred charities from owning a for-profit business for more than five years.

Well-known in food circles, the elder Metropoulos has made a fortune reinvigorating household brands such as Bumble Bee Tuna, Chef Boyardee and Ghirardelli Chocolate. Earlier this decade, he helped build Pinnacle Foods, the parent company of brands such as Vlasic Pickles and Hungry Man frozen dinners. Blackstone Group bought Pinnacle four years ago for $2.2 billion.

The Metropoulos family is expected to shake up the company and move aggressively to rebuild Pabst brands, said Eric Schmidt, an analyst with research firm Beverage Information Group.

“There have been changes already in the company hierarchy and with the executives,” he said. “Based on their track record, there will be more changes to come.”

The Metropoulos brothers introduced a new label last month called Blast by Colt 45 and signed rapper Snoop Dogg as a brand ambassador. Blast, a fruit-flavored malt beverage, has drawn the ire of attorneys general from more than a dozen states for its high alcohol content and youth-oriented advertising. Illinois Atty. Gen. Lisa Madign has called the drink “binge-in-a-can.”

But the new products and slick advertising may be necessary, Schmidt said, to rejuvenate the company after a slide in market share. Pabst shipped about 5.8 million barrels of beer in 2009, down sharply from 25 million barrels in 1995, according to the Brewers Assn. trade group.

“Culturally there’s been a change and a movement towards craft breweries. People have really started caring about their beers and caring about where it comes from,” said Julia Herz, a program director for the brewers group. “That has hurt bigger brewers like Pabst.”

Pabst owns dozens of labels, such as Lone Star, Colt 45, Old Style and Schlitz; many have regional appeal, but few sell well across the country, Schmidt said.

Sales of Pabst Blue Ribbon, the company’s flagship brand, make up about 30% of total sales, he said.

Commonly known as PBR, the beer has become popular with the young generation of hipsters who embrace its blue-collar roots and low price.

On Wednesday night, self-described hipster Joe Price, 28, sat with an extra-tall can of PBR in a downtown Los Angeles bar.

“PBR drinkers want to be the kind of artsy people who are really broke,” the preschool teacher said. “It gives the impression you’re not trying too hard even if you have money.”

His friend Justin Kizzart added that the brand is a good party-time beer for drinking on a budget.

“You can buy a ton for a relatively low price,” said the 28-year-old production planner for American Apparel Inc. “But it’s not the drink of choice if I want a beer to savor.”

The Los Angeles area boasts the second-largest beer market in the nation, Schmidt said. People here bought about 113million cases of beer in 2009, compared with about 147 million in the New York area. Chicago came in third at about 95 million cases.

Pabst’s relocation bucks the trend of companies moving out of Southern California. Northrop Grumman Corp. decided last year to move its headquarters from Century City to a suburb of Washington, D.C., and Nissan North America left Gardena in 2005 for Tennessee.

Among Fortune 500 companies, 19 were headquartered in Southern California and 49 statewide last year, down from 23 companies in the Southland and 52 in the state in 2006, according to Fortune magazine.

Pabst won’t be bringing any brewing jobs to Southern California when it leaves its head office in Woodrige, Ill., because MillerCoors brews and bottles its brands. MillerCoors has a brewery in Irwindale, which it opened in 1980 and now employs almost 600 people.

Anheuer-Busch operates a Van Nuys plant that was built in 1954 by co-founder Adolphus Busch.

Pabst moved to Woodridge from San Antonio in 2006 after getting $1 million in tax incentives and training funds from Illinois. It was not immediately known whether the company received any incentives from Los Angeles or California.