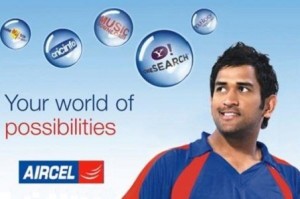 Steve’s breakdown: Celebrity spokes couple Surya & Jothika are doing the advertising now on this acoount but the creative could use some help. Be aware they seem to prefer big agencies.

DELHI, India: Telecom major Aircel is reviewing its creative business. It is understood that the presentation would take place later this month. The current incumbent on the business is Dentsu Marcom.

Before this, in 2007, the company’s creative business was with Leo Burnett and RK Swamy BBDO, with a budget of Rs 50 crore then.

However, in the last four years, as Aircel grew in different circles, the advertising spends of the business were pegged in the vicinity of Rs 200-crore. As is known, Aircel’s media duties are divided between Dentsu Media and Starcom Worldwide.

Aircel’s Marketing Head Rahul Saighal was not available to comment on the development.

Aircel, which was originally operational in South India, expanded its network to the rest of the country in 2009, and has been focusing on value added services and mobile Internet as key drivers for growth.

The company, whose competitors include Airtel, Vodafone, and Idea, was recently in the news for announcing that they will be selling the iPhone4 in India (along with Airtel), one year after its launch in the US. The company also recently launched its 3G services in Punjab and has announced that it will invest Rs 200 crore in the region by 2012 to strengthen the existing 2G network as well.

Image is an advertisement for Aircel