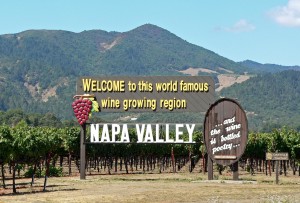 Steve’s breakdown: Rich people have to vacation somewhere. And as I said today and many times before, tourism is a great investment.

NAPA, CA: The budget has been almost doubled from $2.4 million in 2011 to $4.7 million for 2012 to fuel the creative and aggressive marketing program of the Napa Valley Destination Council, according to President Clay Gregory.

Of this total, $1.6 million is allocated for marketing and public relations as well as radio and TV advertising to increase Napa’s visibility.

“This increase is due to the creation of the tourism district established last July that assesses a 2 percent amount of gross revenues from hotel lodging stays to promote the Napa Valley, its many attractions and amenities. Until now, we have not had enough funds to conduct a truly meaningful marketing program, but that has changed dramatically.”

These funds will be invested in various group and meeting sales activities, brand marketing and communications as well as direct-to-consumer marketing, partner relationship management programs and the council’s research and marketing intelligence gathering efforts.

A portion has also been earmarked to expand the council’s staff from three to 13 employees who will manage these programs.

Tourism is the second highest source of revenue for Napa County economy accounting for $1.5 billion annually. Seven percent of tourists are from outside the U.S. while the remainder comes from 13 major cities in the states along with California and the Bay Area.

The key objectives of the program include increasing hotel occupancy in the Napa Valley during prime target periods, driving business to partners, maintaining relationships with buyers and cultivating new business through education and a stepped up awareness program.

“We have an excellent slate of major events and attractions coming up, including the Napa Valley Film Festival (November 9-13), and ‘Flavor! Napa Valley’ — our signature food and wine event — with 120 wineries and a host of celebrity chefs participating (November 17-20).

December is known for the Yountville Festival of Lights and Winterscape, the Calistoga Lighted Tractor Parade, the 12 Days of Christmas Dinner Series at Meadowood and the Napa Historic Victorian B&B Home tour.

“From November to April we celebrate the cabernet season since it is the best time of year to enjoy our flagship wine with hearty food.”

April is also Arts in April month, where over 50 wineries with permanent or temporary art collections are showcased, along with the annual Mozart Festival, plus the “Live in the Vineyard” visitation program.

“Our figures are up when it comes to lodging numbers, occupancy and average daily totals. We are attracting more visitors and the economy is doing better. All of these factors contribute to our economic growth,” Gregory said.