Stanford, ME opportunity about to take off: Town to ramp up airport marketing

Home Industry: DestinationStanford, ME opportunity about to take off: Town to ramp up airport marketing

Stanford, ME opportunity about to take off: Town to ramp up airport marketing 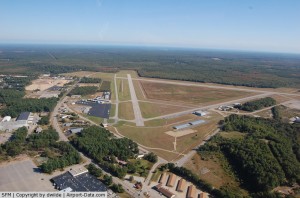 Steve’s breakdown: This is a small one that’s perfect for a regional player. And people still have the perception that we only report the big accounts . . .

SANFORD, ME: With the right marketing and promotion, Sanford Regional Airport can become a key to the local economy, consultants told town officials during a presentation at Nasson’s Little Theatre on Wednesday, Oct. 5.

According to Ron Price, of QED in Florida, and Lois Kramer, of Kramer Aerotek in Colorado, Sanford’s airport already brings in revenue from pilots who land here, store their planes and spend their money at local stores and restaurants — all of which has a multiplier effect on the town’s and region’s economy. To build on that base, Price and Kramer said the town should explore options to generate additional revenue; as examples, they suggested that the airport look into providing aviation education, aircraft refurbishment, firefighting training and a corporate transition base.

The Industrial Development Corporation in Sanford selected the two consulting firms’ vision for the airport after a Request for Proposal the IDC issued attracted 10 proposals from the United States and Canada. IDC board member Gordon Collins chaired the selection process, with help from fellow board member Michael Ralston, airport manager Dana Parry and former airport manager Evan McDougal. Robert Hardison, the president of the IDC, hosted last week’s presentation and called the event a “starting point.”

The goal here is to increase the airport’s activity and revenues and create jobs, Price said. A marketing plan is needed to set priorities for the coming year and develop a “brand.”

Price identified the airport’s assets. The airport’s land covers 1,115 acres, which includes two runways and a parallel taxiway, two fuel farms, a Fixed Base Operator terminal, dozens of aircraft hangars, and provisions for fuel, aircraft and helicopter maintenance, flight training, and sightseeing, among other benefits. Price also cited recent investments at the airport — the aforementioned taxiway, for example, as well as a recent $5.2 million runway renovation, a ramp expansion and a new 64,000-square-foot southwest ramp.

In recent years, approximately $7 million in funds from the federal government has been invested in improving the airport, Price noted.

Price said that while development is expanding at the airport, fuel sales are declining as a result of unpredictable pricing, the recession and the closure of the primary runway during construction for several months in 2010. The airport sold 55,000 gallons of jet fuel in 2010, for example, but sold 125,000 gallons in 2005 — a year that included the arrivals and departures of President George W. Bush on Air Force One.

The consultants nixed the idea that the airport could support a commercial airline. For starters, the airport lacks the infrastructure for such an accommodation. Also, an airline would have to invest at the local airport at a time when the industry is instead contracting.

“This is the perfect example of an unrealistic expectation,” Price said. “Airlines would already be here if those opportunities existed.”

In doing their research, the consultants visited airports throughout the area. They determined that Sanford’s main competitors are the airports in Brunswick and Portsmouth, N.H., both of which have larger staffs and more marketing resources. Sanford needs to be a “nimble competitor” with those two communities.

As for opportunities, the airport could start offering aviation education because there soon will be a shortage of pilots as a result of certain colleges and training programs closing, according to Price. The airport also could offer aircraft refurbishing — not for engines, but for interior work and painting. Price also said the airport could offer firefighting training and tap into “resort traffic,” meaning those who come to southern Maine to visit and stay at the ocean and lakes.

Price also said the airport could establish a corporate aviation transition base.

“All of this brings jobs to the community,” he added.

At the presentation, Kramer offered guidance for marketing the airport and said Sanford needs to be “confident, focused and articulate and simple,” and added that “everyone needs to be on the same page.” She urged airport officials to distribute surveys for visitors at Southern Maine Aviation and local hotels, golf courses and summer camps; to analyze flight plans for helpful data and trends; to develop a marketing campaign that includes brochures, ads, media and other means; and to offer promotional packages.

She also encouraged bringing the airport to the attention of the National Business Aircraft Association, which holds an annual schedulers’ and dispatchers’ convention. Next year’s convention will be held in San Diego in January.

“We need to educate them about our capabilities, so they can add Sanford to their list,” she said.

Kramer also stated that for purposes of “branding,” the name of the airport might need to change. She emphasized the word “international” in Portland’s and Pease’s airports’ names and the word “executive” in Brunswick’s to underscore how the focus of those facilities are made clear in its branding. Kramer provided a few suggestions for renaming Sanford Regional Airport — “Coastal Maine Regional Airport at Sanford,” “Southern Maine Coast Airport” and “Sanford-Kennebunk Airport,” for example. If the airport’s name is to change, Kramer said, it is best to select one that is a “memorable identity” to current and future customers.