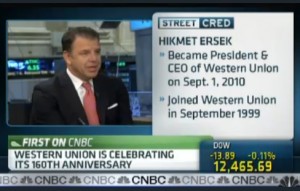 Steve’s breakdown: On CNBC today, Hikmet Ersek, Western Union president & CEO talked about the who, what & where of the company. The most surprising fact that came out of the interview was he said the “I” word. When asked who were his customers, he plainly said Immigrants!

As for Ersek, he has moved fast since taking office naming a number of executive changes including a new CMO, president of consumer financial services and president of business development. A detailed list of executive moves was reported by us on April 4th.

So here’s the opportunity: Couple the timing of all those executive changes with the news of the company’s 160th anniversary with the added knowledge of their true target market and you’ve got the ingredients for a great first phone call. And you should do it before they call an advertising review. I’m just sayin’ . . .