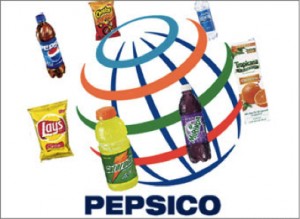 Steve’s breakdown: Simon Lowden is taking over as PepsiCo’s chief marketing officer in the US and Brad Jakeman has taken up a lead role for Pepsi globally. Together with a team of about 30 people, they are creating a Global Beverages Group. They say TBWA & BBDO will work together on the new project but look for that to fall flat on it’s face. There’s opportunity in upstate NY; go see what you can do.

PURCHASE, NY: PepsiCo, the food and soft drinks giant, is adopting a more globalised approach to marketing its beverage brands.

Like main rival Coca-Cola, PepsiCo’s drinks are available in over 200 markets around the world at present.

However, while approximately half of all soft drinks purchased on this level are attributable to Coca-Cola, such figures fall below 25% for PepsiCo.

In an attempt to change this situation, PepsiCo has formed a Global Beverages Group, pursuing an overarching perspective crossing over the various geography-specific divisions where it operates.

These localised units include separate food and beverage arms in the Americas, alongside a wing responsible for Europe, and one covering Asia, the Middle East and Africa.

While the regional sub-groups typically strategise up to 12 months ahead, the Global Beverage Group assesses R&D and marketing plans for between 12 and 48 months into the future.

It will also uncover the attitudes, behaviours and habits emerging in different markets, and discern which could be applicable on a wider stage.

Massimo d’Amore, chief executive of PepsiCo Beverages Americas, suggested a variety of trends had encouraged such a shift in emphasis.

“[Previously] it was more of a global coordination as opposed to a global management. Technology, both social networks and mobile platforms, have created this global generation.”

“We really want to connect our global brands with the global generation, and the best way to do that is with global management.”

One brand currently seeing this process as work is the firm’s eponymous cola, with an international campaign set to be rolled out in early 2012.

Rather than give creative duties for this effort to a single agency, a “steering committee” has been established representing TBWA/Chiat/Day, its US shop, and BBDO, handling the brand overseas.

Elsewhere, several major in-house appointments have been implemented, with Simon Lowden taking over as PepsiCo’s chief marketing officer in the US.

Similarly, Brad Jakeman has taken up a lead role for Pepsi globally, as well as working on other soft drinks, and Lorraine Hansen is assuming the equivalent position for hydration brands.

Both Jakeman and Hansen will have teams of roughly 15 staff, based in PepsiCo’s headquarters in America.

Although the scale of such changes can seem overwhelming, d’Amore asserted they are a necessity of the new trading climate.

“There is real logic to this perceived madness,” said d’Amore. “Now that we have clarity, I think morale is much better.”

In moving forward, PepsiCo can build on the learning gathered by Gatorade, which is already following an increasingly unified model worldwide.

As this transition began, d’Amore was highly involved in helping develop practices and procedures.

Since then, Sarah Robb-O’Hagan, president of Gatorade North America and global CMO for sports nutrition, has been given much freer rein.

“I was very hands-on 18 months ago, 12 months ago, but now she’s really running the ship, because we are going in the right direction,” said d’Amore.

“Right now I’m very hands-on on the soft drink business, because we’re in the middle of turning around. I think it’s the only way you can drive through turnarounds.”