Home Accounts in ReviewAgencies line up for Global Radio brief 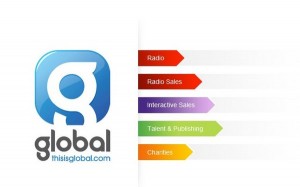 Steve’s breakdown: It’s true, agencies are lining up for this one so get in there quickly as to not miss out.

LONDON, UK: Global Radio, the UK commercial radio broadcaster that owns stations such as Classic FM, Capital FM and the Heart Network, is looking for an agency to handle its estimated $8 million advertising account.

A number of agencies have been approached directly by the company as it looks to consolidate its integrated advertising business.

Most recently Karmarama handled the bulk of Global Radio’s advertising work, overseeing the marketing for Heart FM and Capital FM.

The agency first started working on the business in September 2009 and earlier this year launched a new TV ad for Capital FM featuring an array of artists, including Rihanna, Usher and JLS.

However in March Karmarama won a place on the BBC’s £20m advertising business, where it may be required to promote the corporation’s radio offering.

Other agencies on the Global Radio roster include Swordfish, DCH and Golley Slater & Partners Midlands. The company uses PHD’s Rocket to handle its media planning and buying.