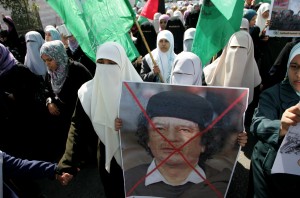 Steve’s breakdown:Back in April we reported that a “Top Libyan defector seeks PR firm in Europe.”  I guess they found a firm and it worked. Other wise I don’t think Moammar would be trying this. Either way, it’s still an account in review.

NEW YORK, NY: Moammar Gadhafi is looking for PR firms in New York and London as he battles rebels in Libya, his diplomats say.

Dia Abubaker Alhutmany of the Libyan Mission United Nations confirmed the pitches to The New York Post, saying “the government is trying to have the support of people outside the country.”

Ali Darwish of the Libyan Information Ministry has e-mailed leading public relations firms, asking them to “present our just and fair case to the world,” the Post reported Sunday.

“Libya has been under an unjustified media and PR attack which led to NATO’s military involvement,” he wrote.

But he also promised discretion, saying, “We can formalize any deal with your organization through a third party to help move things forward fast.”

There have been no takers yet.