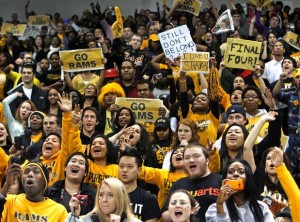 Steve’s breakdown: Here are some folks who know when to take advantage of some good news. VCU wants to leverage their NCAA tournament run to win over more students.

RICHMOND, VA: Virignia Commonwealth University, the Richmond school of 32,000 that became last year’s Cinderella story in the NCAA basketball tournament, is looking for agency help to burnish its image nationally and boost enrollment.

VCU issued an RFP on Aug. 11 for PR and marketing communications and is accepting proposals through September 13.

The school’s board of visitors approved a new strategic plan in May to “set a vision” for VCU to be the “nation’s top urban, public research university.” Much of the communications work outlined in the RFP will go toward supporting that new vision.

The RFP notes that surveys show awareness of the school as a quality, affordable public university with gaps in familiarity of VCU as a major research university which contributes significantly to the local economy.

The winning agency will work with VCU’s division of university relations, which encompasses communications and PR, creative services and marketing.

A one-year contract with four year-long options is expected.

The VCU Rams mens basketball team reached the Final Four in the NCAA tournament in March for the first time, upsetting the No. 1 seed Kansas Jayhawks before falling to Butler.