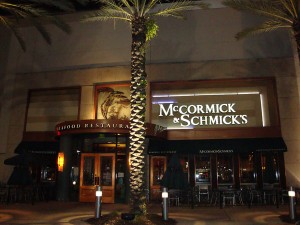 Steve’s breakdown: The new owner has some deep pockets for marketing. My question is whether they are going to fold one seafood place into the other. The other thing is MC&S has a pretty active PR department that will probably not go away.

HOUSTON, TX: The owner of restaurant company Landry’s Inc. said Tuesday that he has agreed to buy McCormick & Schmick’s Seafood Restaurants Inc. in a deal that values the Oregon-based chain at more than $130 million.

Tilman Fertitta, who already owns about 10 percent of the seafood restaurant chain’s shares, said he will acquire McCormick & Schmick’s through a cash tender offer of $8.75 per share.

He expects to begin the tender offer within the next 10 business days.

The offer represents a 29 percent premium to McCormick & Schmick’s Monday closing stock price of $6.77. Based on its about 14.9 million outstanding shares, the offer values the company at about $130.1 million.

Fertitta said McCormick & Schmick’s profits have been hurt by the economic downturn, but the company will get the boost it needs from Landry’s size, strength and financial resources.

Fertitta and Landry’s previously offered to buy McCormick & Schmick’s in April, but the proposal was rejected by the company’s board. The current offer came after sale discussions between the two companies, Fertitta said.

Fertitta said the addition of McCormick & Schmick’s will complement its existing seafood restaurants and expand its presence in desirable restaurant locations.

McCormick & Schmick’s restaurants generate over $300 million in annual revenue and include over 80 restaurants in 26 states in the U.S. and Canada. It is based in Portland, Ore.

The company also owns and operates gaming, hospitality and entertainment businesses, including Golden Nugget Hotel & Casinos and the downtown aquariums in Denver and Houston. Landry’s is expected to generate about $2 billion in revenue this year.

Over the past 52 weeks, shares of McCormick & Schmick’s have traded between $5.43 and $10.47. But the shares have taken a beating in recent months, as tough economic times and weak consumer confidence have prompted many Americans to cut back on dining out.

Since the beginning of this year, McCormick & Schmick’s shares have lost about 26 percent of their value.