Home Industry: For all marketersFriday Surprise: Marketing chief reporting to the merchandising chief at Wallmart!?! 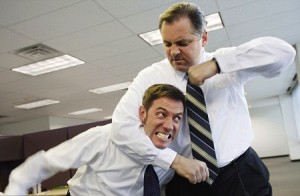 Steve’s breakdown: I think this news is going to hit every CMO like a football to the groin. Or at least a nuggie. Like Wallmart needed one more reason for us to hate them. Is there a new business opportunity here? Here’s an idea. If the CMO says no to you pitching the business, empower the merchandising chief that they should hire your firm. (kidding – don’t do that)

BENTONVILLE, AR: Wal-Mart Stores Inc (WMT.N) said on Friday that its U.S. marketing team would now work under the leadership of its chief merchandising officer rather than as a separate group as the world’s largest retailer works on improving its communication with shoppers.

Mac Naughton, who is responsible for merchandising across Walmart’s more than 3,850 U.S. stores, continues to report directly to Simon.

The shift comes as Walmart sees a need for better coordination between the two groups. Shopping and advertising are being quickly transformed by the Internet, social media, smartphones and other shifts in both shoppers’ behavior and reaching shoppers with the right campaigns.

Walmart U.S. finally saw sales at existing stores grow during the fiscal third quarter after nine consecutive quarterly declines. Its efforts during the holiday season, such as offering a wider variety of merchandise, a price guarantee and bringing back a broader layaway plan, appeared to be successful, though quarterly results are not due until February 21.

Quinn, who joined Walmart in 2005 and got his current role in 2007, leads marketing efforts including customer research, strategy, e-commerce marketing, private brands and customer communications.

The announcement came in a memo sent to U.S. employees on Friday that was obtained by Reuters.

Shares of Wal-Mart were down 0.4 percent at $60.75 in afternoon trading, in line with the decline in the broad market.