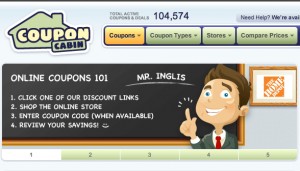 Steve’s breakdown: They seem to be all jazzed up about the advertising the new guy did while at CareerBuilder. So my guess is there’s probably a new ad agency in their future. Be the first to call.

Prior to joining CouponCabin.com, Castellini served as Chief Marketing Officer at CareerBuilder, where he led the company’s efforts in maximizing brand visibility nationwide through multi-faceted, integrated marketing programs. In addition to overseeing national and local advertising, public relations and consumer products, Castellini spearheaded the continued expansion of CareerBuilder’s partnership network of more than 9,000 websites worldwide.

The national advertising campaigns that were developed under Castellini’s advisement have been critically acclaimed and instrumental in strengthening the company’s leadership in traffic. In addition to winning Gold Effie awards, CareerBuilder’s widely popular TV spots have been named “Funniest Commercial of the Year” in TBS’s annual poll and been included in CBS’s “The Forty Greatest Super Bowl Commercials.” In addition, CareerBuilder’s Monk-e-Mail has been hailed as one of the most successful viral campaigns of all time.

“We are thrilled to have a seasoned marketing veteran like Richard on board at CouponCabin.com,” said Scott Kluth, Founder and CEO of CouponCabin.com. “We are so impressed with his work at CareerBuilder, particularly his ability to build online traffic, and are confident that his strengths are exactly what we need to make CouponCabin a household brand.”

At CouponCabin, Castellini will manage all marketing initiatives including social media, public relations and advertising, among others. In his past roles, Castellini has appeared in hundreds of television segments including CNN Newsroom, CNBC Squawk on the Street, FOX America’s News Headquarters and ESPN Cold Pizza.

“CouponCabin.com is an amazing company that has grown tremendously in the past few years,” said Castellini. “I look forward to working with such a fresh, young company and continuing the growth and success that Scott and his team have cultivated.”

CouponCabin.com offers online coupon codes, printable coupons, grocery coupons and local coupons without requiring its users to share any personal information. The site has grown from 150 stores and 1,000 offers in 2003 to 3,000+ online stores with more than 100,000 offers. CouponCabin.com offers live chat help, a weekly newsletter highlighting the latest top deals, coupon alerts and much more.  The average CouponCabin.com shopper spends 80 seconds on the site and saves $19 per order.