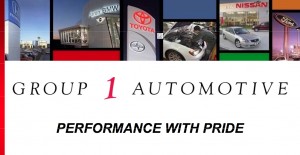 Steve’s breakdown: Here’s someones chance to get in the car business!

Group 1 owns and operates 105 automotive dealerships, with 136 franchises and 28 collision centers, in the United States and in the United Kingdom and now finally has a marketing leader. Expect to see a review of much of its communications strategy in the near future.

The retailer announced Monday that its three U.S. regions will be consolidated into two starting next month, while also revealing the leaders for those respective regions and a new position: vice president of marketing.

“The consolidation of our three regions into two further strengthens and streamlines Group 1’s operations,” stated Group 1 president and chief executive officer Earl Hesterberg. “In addition, the creation of the corporate marketing position will allow us to enhance our marketing effectiveness and efficiency.”

Explaining how the consolidation — which is effective July 1 — will work, Group 1 noted that the 11 dealerships in the former Western Region will be consolidated into the Central Region.

This new consolidated region will be known as the West Region and will be headed up by regional vice president Frank Grese Jr., who has led the Central Region since 2006. Grese will report to Hesterberg.

With the consolidation, 58 dealerships with 79 franchises will comprise the West Region, which includes California, Kansas, Oklahoma and Texas.

Martin Collins, who had headed up the former Western Region, has already moved on to Ford to take an executive position there.

Meanwhile, the East Region will have a new leader. Darryl Kenningham will become regional vice president of the East Region on July 1 and will report to
Hesterberg. His most recent post was at Houston-based Ascent Automotive, where he was chief operating officer.

Kenningham will replace David Hult, who is moving from his post as regional vice president of the Eastern Region to serve as vice president of marketing, a new position at Group 1. He moves over to the Houston corporate office after the first of the month and reports to Hesterberg.

Lastly, Group 1 said that it has named a market director for California. Filling that post is Chris Hayden, who has been the CEO of Ford Retail at Ford of Europe since 2000. Hayden will report to Grese.

“We are pleased to welcome Chris Hayden and Daryl Kenningham to Group 1’s management team,” Hesterberg added. “Their respective expertise will strengthen our company which has proven automotive leaders with a wide range of brand and geographic experience.”