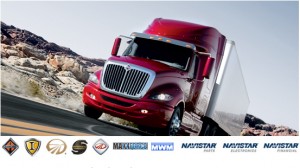 Steve’s breakdown: Does the kid in you wants this account sooo bad you’ll even deal with their dealer ship network? Well, that means you’ll be good with calling the new guy up.

WARRENVILLE, IL: Navistar, a manufacturer and marketer of medium and heavy trucks, has named Al Saltiel as the new chief marketing officer.

In his new role Saltiel will manage the company’s marketing resources and will have worldwide responsibility for driving its expanding portfolio of brands.

Saltiel previously served as president of NC2 Global, a 50/50 global joint venture between Caterpillar and Navistar, which develops, manufactures and distributes commercial trucks outside North America and India.

Prior to his two-year stint at NC2, Saltiel had served as vice president, marketing for Navistar.

Previously, Phil Christman, Navistar’s president for global truck operations and a member of the NC2 board of directors, has been named as president of NC2 .

“During his time at NC2, Saltiel introduced Cat and International products and dealers in key markets and he’ll bring bold ideas to our mission of growing Navistar brands globally,” Ustian said.