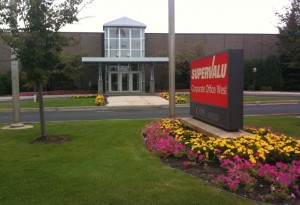 Steve’s breakdown: SUPERVALU went on a buying spree in 2010 and now does $37 billion in retail sales through brands such as Acme, Albertsons, Cub, Farm Fresh, Hornbacher’s, Jewel-Osco, Lucky, Save-A-Lot, Shaw’s / Star Market, Shop ‘N Save and Shoppers. That’s a lot of brands and they all have different histories and personalities. As of right now, AgencyCompile.com has over ten agencies saying they handle some of the business. I suspect the new guy might be looking into that.

MINNEAPOLIS, MN: SUPERVALU INC.today announced it has named Michael Moore, executive vice president and chief marketing officer. Moore, 47, joined the company in 2011 in the role of business transformation officer, where he has been integral in furthering the implementation of SUPERVALU’s business turnaround. Moore was named to the top marketing post following this week’s decision by Julie Dexter Berg to leave the company and return to the West Coast.

Prior to SUPERVALU, Moore spent the past 24 years in a variety of executive leadership positions within customer business development at Procter & Gamble (P&G). During his tenure with P&G, Moore led cross-functional organizations that included sales, marketing, finance, operations and human resources. He most recently served as director of P&G’s grocery retail group, where he led the business unit directly responsible for more than 30 percent of P&G’s annual Food Channel sales.

“Michael has a terrific understanding of the food industry and the challenges we face as a grocery retailer in today’s environment,” said Craig Herkert, SUPERVALU’s chief executive officer and president. “I am confident that he will move quickly to build marketing programs that are effective and efficient while ensuring that we continue to drive traffic and sales through innovative and engaging consumer marketing programs. He is a proven leader and I am thrilled to have him join our leadership team.”

Moore, who will report directly to Herkert on the SUPERVALU executive team, also served in leadership positions supporting P&G’s global beauty care division, led account teams dedicated to SUPERVALU, and led P&G’s market strategy and planning organization for the Paper business in North America. In his new role at SUPERVALU, Moore will lead all of the company’s marketing activities, including overseeing customer and brand strategy, advertising, customer loyalty, and research and analytics.

About SUPERVALU INC. SUPERVALU INC. is one of the largest companies in the U.S. grocery channel with annual sales of approximately $37 billion. SUPERVALU serves customers across the United States through a network of approximately 4,300 stores composed of 1,104 traditional retail stores, including 798 in-store pharmacies; 1,309 hard-discount stores, of which 922 are operated by licensee owners; and 1,900 independent stores serviced primarily by the company’s traditional food distribution business. SUPERVALU has approximately 135,000 employees. For more information about SUPERVALU visit www.supervalu.com .