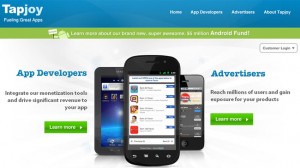 Steve’s breakdown: If Tapjoy truly wants to become a consumer brand they better get their ad on! At least thats the pitch I’d give them and so should you.
SAN FRANCISCO, CA: Moving from one of the gaming’s key brands to a mobile ad network – no matter how fast it’s growing – might seem to be a strange shift. Not for Peter Dille though.

“It’s incredibly exciting. There’s so much energy in the sector. I really feel like I’m drinking from the fire hose,” Dille says, a month into his new role.

“People are enthralled by their smartphones, and everyone’s gaming,” he enthuses.

Of course, as an experienced marketeer, Dille hasn’t joined Tapjoy for his own benefit. The company is on an aggressive drive, both in terms of growing its size and revenues, as well as its profile in the mobile advertising and monetisation space.

After all, it’s hardly an industry secret that – market conditions allowing – Tapjoy is shaping up for an IPO.

Dille doesn’t address that specifically, merely mentioning he’s in the process of building his own team to push the company’s brand from being industry-oriented to one with more of a consumer angle.

“I don’t want to say too much about it yet, but we want to be a more meaningful brand for consumers,” he says.

Up close and personal

His point is this will feedback into Tapjoy’s industry reputation with content developers and the big brand advertisers who are increasingly looking to pump their cash into mobile campaigns that are more effective than TV or web spends.

“It’s ideal for movie companies and packaged good companies because they’re offering something to consumers and we can ensure they’re watching the entire video before they get their reward,” he explains.

“Mobile advertising is great because it’s so direct and personal.”