SABMiller Intends to Grow with a Foster’s Takeover

Home Industry: Booze/Beer/WineSABMiller Intends to Grow with a Foster’s Takeover

SABMiller Intends to Grow with a Foster’s Takeover 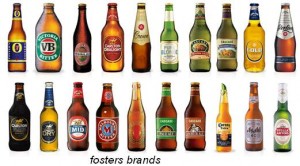 Steve’s breakdown: Though SABMiller has been growing mostly through selective mergers, acquisitions and restructurings they can’t ignore the marketing requirements of their brands. And that spells opportunity for agencies that are fans of Fosters and their 19 other beer brands.

LONDON, UK: The process of concentration within the beer industry is continuing. The brewing giant SABMiller bid 9.5 billion Australian dollars for the brewing company Foster’s and wants to continue the successful way of expansion. With the production, marketing and sale of alcohol, people can earn good money — at least when they are working with large and global scales. This can be seem not only in “hard drugs” like spirits in the case of of Diageo, but also in the beer industry.

In industrialized countries, the beer industry is characterized by tough competition and rising costs, which in turn lead to increasingly intense consolidation. Significant growth comes from emerging countries.

The consolidation is going on as we have seen on Tuesday. The Anglo-South African brewer SABMiller has announced plans to take over the Australian brewer Foster’s. The company has submitted an offer to the Australian leading brewing company of over 9.5 billion Australian dollars or the equivalent of 10 billion US dollars.

Fosters shares are up 14 percent to 5.16 Australian dollars. This is an outbreak of the share price from the volatile sideways movement of the recent years.

SABMiller, the world’s second largest brewer by ejection behind brewer Anheuser-Busch InBev, will continue its offer despite the negative attitude by the Forster’s board. “We are in contact with the Foster’s board and hope that it will recommend our offer to their shareholders,” Graham Mackay, chief executive of SABMiller said.

SABMiller’s considers Foster’s shares an attractive investment because the company held seven of the ten best-known beer brands in the country. The target company should also benefit from an ongoing economic boom in Asia which affects the Australian economy in a big way.

Some time before, a takeover rumor of Foster’s was available at the capital market, especially since the company had cleaved his ailing wine business and transferred it into a separate publicly traded company. The sales and profit performance of the company was disappointing in recent quarters. On the other hand, the market position offers the opportunity for an experienced management team to realize big rationalization potentials and expanding potential in growing Asian markets.

SABMiller has experience in integration and rationalization

SABMiller has enough experience in integration and rationalization because the company has grown in recent years through selective mergers, acquisitions and restructurings. Above all, they grew into a highly profitable company. The company itself was formed in 2002 from the merger of South African Breweries and the Miller Brewing Company. The Group is represented in over 75 countries by breweries. Revenues for the fiscal year 2010/11 amounted to 15.1 billion US dollars and in 2009/10 to 14.1 billion dollars – an increase of 7.1 percent.

After a crises-related decline in sales and earnings, both figures are back on the way to a long-term growth track. That alone is derived from the strategy to expand within economic areas of good and robust growth. Finally, data of smaller competitors show that the sale of good beer in South America, Africa and Asia can create relatively high growth rates.

The largest shareholder of SABMiller is the Altria Group (MO) with a share of 27.3 percent. Price-earnings ratio of SABMiller amounts to 15.8 and 14.1 based on earnings estimates for the current and next fiscal year. With dividend yield of 2.6 percent which increased steadily over several years, the company had a good track record and is fair valuated. Larger share setbacks could be an interesting investment opportunity for long-term investors, at least in the context of a normal economic situation worldwide.