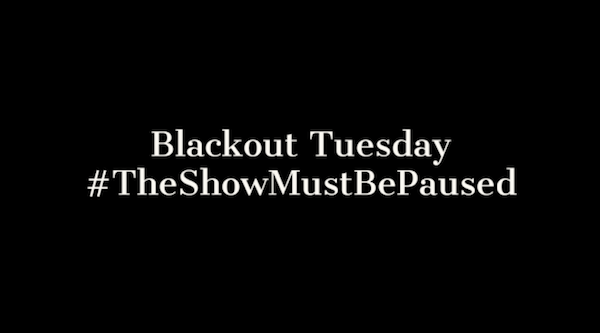 Steve’s breakdown: We’ve never observed Blackout Tuesday in our 10 year existence but this year is different in every way so here goes.

Ratti Report completely supports the Black Lives Matter movement. Our headquarters home of Asbury Park had its protest yesterday evening with thousands attending including us. Marching completely around the east side of the city, the protest was wonderfully peaceful. Go Team!!

As far as Blackout Tuesday, we don’t believe our members have the luxury to completely pause business so we’re publishing one new lead from the World Health Organization. We’re sure the Black Lives Matter & Blackout Tuesday membership are going to be cool with that.

EVERYWHERE, USA: As protesters and industries react to the killing of George Floyd and other black victims of police brutality, artists, executives, and companies from across the music business will participate in a day of silent protest on Tuesday — though a lack of clear messaging from the major labels makes its meaning open for interpretation.

Organizers of the planned June 2nd event asked the industry to “not conduct business as usual” and instead spend time reflecting on how to support the black community. The original statement was posted toward the end of last week and quickly gained momentum over the weekend. By the end of the weekend, the three music majors Warner Music Group, Sony Music, and Universal Music Group, had all pledged support alongside many of their flagship labels, though others in the industry expressed confusion at the message’s intent.

Thomas and her partner in the initiative, former Atlantic Records employee Brianna Agyemang, made a formal call to action, asking those who work in music, entertainment, and show businesses to “pause” on Tuesday because “the show can’t just go on, as our people are being hunted and killed.”

“#Theshowmustbepaused is an initiative created by two black women in music in observance of the long-standing racism and inequality that exist from the boardroom to the boulevard,” the duo wrote. “Our mission is to hold the industry at large, including major corporations and their partners who benefit from the efforts, struggles, and successes of black people accountable. To that end, it is the obligation of these entities to protect and empower the black communities that have made them disproportionately wealthy in ways that are measurable and transparent.”

“I don’t want to sit on your Zoom calls talking about the black artists who are making you so much money, if you fail to address what’s happening to black people right now,” Thomas wrote. “That’s the only ‘rollout plan’ I want to discuss. And it’s not solely on the ‘urban department,’ Black label heads, Black Presidents, & Black employees to navigate. Your silence is noted.”

Columbia Records was one of the first labels to publicly issue a statement independent of Thomas and Agyemang’s initiative. “We stand together with the Black community against all forms of racism, bigotry, and violence,” the label wrote. “Now, more than ever we must raise our voices to speak up and challenge the injustices all around us.”

A flurry of social media posts from record labels and other industry employees soon followed. Some labels advised specific actions. Interscope announced that the company would “contribute” to organizations that are focused on bailing out protesters “exercising their right to peacefully assemble” and aiding lawyers in the fight for judicial changes, and that it would help nonprofits working toward “economic empowerment in the Black community.” (A rep for Universal Music Group, Interscope’s parent company, did not reply to a request for comment or clarification on how much the label would contribute.) Interscope, which promised to not release any new music during the week of June 1st, also suggested that its followers text “FLOYD” to 55156 to voice opinions against police violence and/or donate to the Minnesota Freedom Fund, as well as look into Color of Change, Winning Justice, and the ACLU.

Capitol Records said it will make a donation to Color of Change, which wants to “end practices that unfairly hold Black people back, and champion solutions that move us all forward.” Both Atlantic and Warner Records encouraged followers to text “FLOYD” to 55156, add their names to the Justice for George Floyd petition at change.org, and donate to the Official George Floyd Memorial Fund. 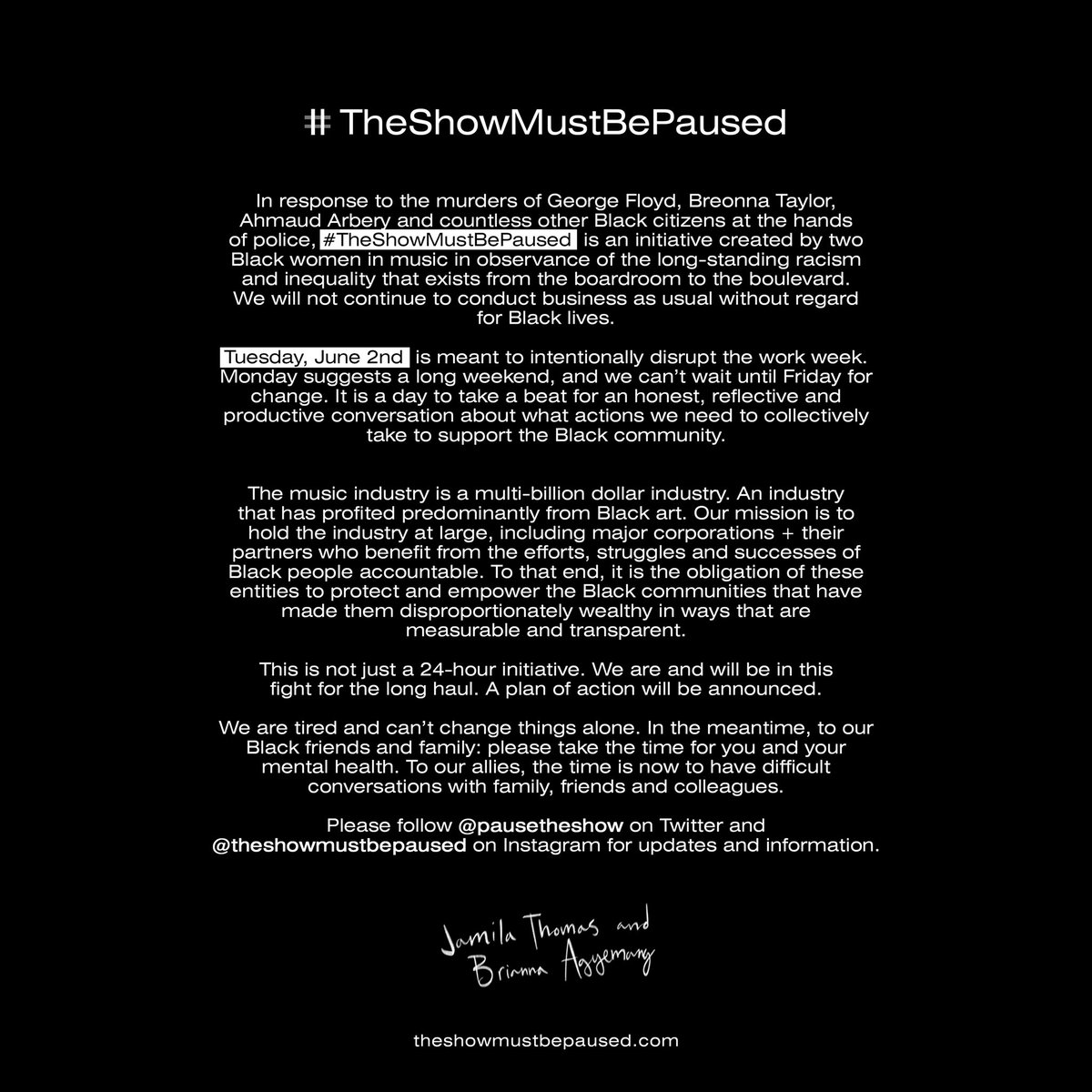 While Epic, Columbia, and Republic were among those who shared that their teams would proudly recognize Blackout Tuesday, the labels did not publicly provide any sort of instructions or calls to action. Columbia pushed that Tuesday was “not a day off” and was, instead, a day to “reflect and figure out ways to move forward in solidarity” — echoing the words of Rob Stringer, CEO of its parent company Sony.

“Many of you have phoned or emailed me to discuss what we can say or do as a company in reaction. We are obviously going to respond but actions are louder than words,” Stringer wrote in a memo to employees. “In the short term, we will be rolling out a company donation policy to relevant organizations and causes throughout this week. As a company, we will observe Blackout Tuesday. However, we are still determining the best ways to approach Tuesday. It should not just be a day off as it needs to be more meaningful than that.” (A rep for Sony declined further comment.)

“Everyone can take a day out from their jobs,” Warner Music CEO Steve Cooper wrote in a memo. “Please use this time to concentrate on helping yourself and others — whether that’s dealing with your own feelings, supporting your friends and colleagues, or taking action.” (A rep for Warner Music declined further comment.)

“We strongly support protest initiatives such as Blackout Tuesday and other valuable and heartfelt non-violent protests,” Universal Music CEO Lucian Grainge said in a staff memo. “But, as we know, protest is just a start, not a solution. Real and constructive change — lasting change — requires sustained focus and unwavering commitment over time.”

“There’s a massive movement going on in the country right now. Why are they starting their own branded movement?” —Joe Steinhardt, Don Giovanni Records

While Grainge laid out some initiatives, including the formation of a “UMG Task Force to accelerate our efforts in areas such as inclusion and social justice,” multiple employees across the music industry expressed confusion to Rolling Stone on their respective companies’ goals for Tuesday, while critics assailed the lack of a specific call to action.

Joe Steinhardt, owner of Don Giovanni Records and a teacher at Drexel University, tells Rolling Stone — from the scene of a protest in Philadelphia on Monday — that he believes the movement is an “ignorant and misguided way” to protest, adding that what the labels should be doing is supporting the already existing efforts and initiatives that had been active such as Black Lives Matter.

“Everyone at their fucking offices should clear out anonymously, not as a promotional effort, not with your Sony logo at the bottom of it — get in the streets,” Steinhardt says. “I’m in the streets; most of my artists are in the streets. Anyone who can should anonymously be joining the movement. There’s a massive movement going on in the country right now. Why are they starting their own branded movement?”

“They’ll donate money, but where is that coming from? Their artists,” Steinhardt adds. “How about you make your business makeup reflect this issue: Who works in your buildings? Who’s included? We can all laugh at the NFL [statement] yesterday, but the music industry has been just as laughable. What the fuck is a cultural blackout? Culture is what Donald Trump goes to censor. Why are we self-censoring?”

Jessi Frick, founder of fellow indie label Father/Daughter Records, tells Rolling Stone her label won’t be taking part in the day because of the lack of clarity from major labels who’d initially shared the message, adding that her label had already paused promotion on music since last week in light of the protests and would be speaking with other indie labels to discuss more strategies and initiatives to contribute.

Thomas and Agyemang did not reply to requests for comment. As such, it’s unclear where the ideas between the duo’s original intentions and the messaging from the major labels coalesce.

“[Thomas and Agyemang] put up their site with way more information than any of these major labels shared in their Instagram posts,” Frick says. “The way those posts read to me made me think, ‘Read the room.’ The way it was first put out there wasn’t something I wanted to participate in; getting offline didn’t seem right. If you have a platform and you’re able to get information out, you should use that. Most of these labels have been profiting off the backs of black musicians from the very start, and this just felt like something they should be doing all the time, not just when there’s pressure on them to do so.”

Although appreciative of the industry-wide anger toward injustice and police brutality, Chris Anokute, former SVP of A&R at Island Def Jam who now runs the artist-development company Young Forever, expressed that the movement should not end at trending topics and hashtags. “This is not a copy and paste, using the same language and/or words that I see on every corporate post over the last few days,” Anokute wrote. “And all due respect, but black people and most people who care in your organizations have been DISCONNECTED all week from business as usual, so don’t placate us with one fucking day! We are pissed off.”

“I want to commend whoever the individual(s) are that came up with ‘BLACKOUT Tuesday.’ We appreciate you and respect your leadership. I stand with you, behind you, in front of you, wherever I need to be,” Anokute wrote on Instagram. But, “I honestly don’t know what Blackout Tuesday is, so I can’t observe something until I know its origin, who it came from, where it came from, so I know its real intention,” Anokute adds to Rolling Stone. “I can’t take someone’s word for it. That’s the problem today.”

Bon Iver, one of the only artists to speak against the movement, wrote on Twitter that “the music industry shutdown thing feels tone deaf to me” and asked followers to “participate in our actual world.”

Outside of the #TheShowMustBePaused plan for June 2nd, several figures in the music industry have written to political leaders in response to the George Floyd police killing. Last week, music attorney and artist advocate Dina LaPolt sent a letter to the Hennepin County attorney, copying Congresswoman Karen Bass — chairperson of the Congressional Black Caucus — Black Lives Matter co-founder Patrisse Khan-Cullors, and record executive and host of the Wrongful Conviction podcast Jason Flom. In it, they demand that the officers involved in the death of Floyd be immediately arrested and charged with first-degree murder.

“While the swift action of Mayor Jacob Frey is a necessary first step, I expect and demand that these officers are arrested, charged, and prosecuted to the full extent of the law. Anything less would constitute a serious miscarriage of justice,” LaPolt wrote. “This is another example of another unarmed African American man killed in police custody, while Americans are left with no confidence that justice will be served. George, his family, the black community, and the American people deserve better.”

Sources close to Tuesday’s plan say more initiatives from the industry are on the way and will be announced shortly.