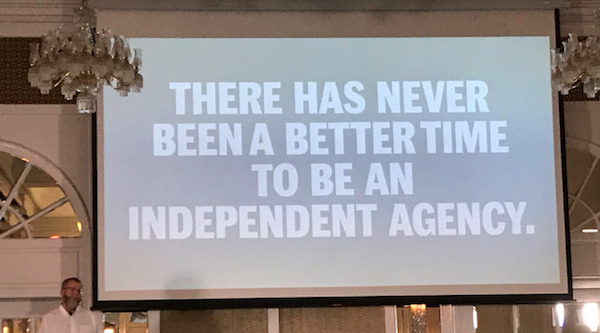 Steve’s breakdown: Just wanted to share this good news to most or our membership. That’s right, most of our members are not part of a holding company and it is our hope more will split away from the lumbering behemoths.

BTW: The image is from a presentation given by an executive of the indie agency Weiden & Kennedy.

EVERYWHERE, USA: When Domino’s Pizza broke up with MDC Partners’ CPB in favor of a new creative agency, independent WorkInProgress, Chief Marketing Officer Art D’Elia was asked why the company was splitting with its holding company-owned agency after 13 years. “I really feel that the independent agency model gives us more flexibility and less distractions,” he said.

That public advocacy for an independent over from a major marketer gave legs to the age-old story that their model is better. But lately it’s become a bit more than a story, as “nimble” independents seem to be picking off more business from the holding company giants.

Ferrero USA last year picked Terri & Sandy as its U.S. creative agency of record for hazelnut cocoa spread Nutella, duties that had been held by Omnicom’s Merkley & Partners. Seventh Generation shifted its account from MDC’s 72andSunny to independent agency Opinionated. Papa John’s delivered its creative account to Camp + King in August while the agency was still independent (Havas has since acquired a majority stake). And while some clients aren’t taking the full leap, there’s a drip-drip effect as they add indies to a roster that includes major holding companies. Kraft Heinz—though it is currently reviewing the many shops on its roster including dentsu mcgarrybowen—has been funneling more work to creative vet Greg Hahn’s new agency Mischief @ No Fixed Address. In October, Molson Coors tapped Activista—a so-called socially-minded creative shop in Los Angeles run by Paco Conde and Beto Fernandez—to handle the launch campaign of its Coors Seltzer brand, rather than agency partners Omnicom’s DDB or Publicis Groupe-owned Leo Burnett.

Small shops are having their “moment” in the pandemic as clients demand exactly what they boast they can provide: flexibility, speed, stronger partnerships and affordability. Whether the recent momentum is sustainable or merely a blip in time remains to be seen.

Indie shops, of course, argue that the trend will hold. They claim they are faster because they aren’t stalled by red tape and bureaucracy that bog down holding companies. They say that when you hire a smaller agency, all clients get direct access to senior leadership. And while some people say “nimble” is actually a euphemism for cheaper, indies say the reason they are relatively cheaper than larger holding company agencies is because they are more efficient with less overhead, therefore costing clients less in time and money.

Sandy Greenberg, who logged years at Interpublic Group of Cos.’ FCB before co-founding Terri & Sandy, says it’s simple. “When we pitch, we work as a team,” says Greenberg. “The team at the top is working closely with strategy. We’ll agree on a strategy in a week, let’s say. What happens at a big agency, in a week, strategy is only starting to go up the line. You have the strategy group [that agrees on a plan and then takes it to] the chief creative officer of the New York office who has a problem with the strategy, so you go back and do it again, then the president, who was traveling, comes back and says ‘I wouldn’t do it this way, I’d do it that way.’ Now it’s three weeks and we’ve had a strategy, we’re already doing the work and they haven’t even gotten the strategy down.”

That’s not to say clients don’t have their own bureaucracy to deal with. “Sometimes a big client has a lot of people on their end they need to go through,” Greenberg says. “But it’s easier when you don’t have an agency that also has that. When you have bureaucracy on both sides, it’s hard to get things done.”

With an indie, there are also fewer silos to impede speed. Bryan Yasko, president of Johannes Leonardo, which bought the majority of itself back from WPP last year, says the “main difference” he sees between indie and holding company shops “is that in an independent agency, ‘creativity’ isn’t relegated to one department.” He says at his agency “ideas come from everywhere.”

“This idea of ‘creativity’ isn’t just a line item on a contract or one department’s job,” Yasko says. “A lot of legacy agencies were and still are built that way.” After struggling in the beginning of the pandemic, laying off a portion of staff in April, JL has since won 11 new brands and assignments, including for the launch of Molson Coors’ Vizzy hard seltzer. Yasko claims it declined 20 projects and pitches this year.

Jason De Turris, VP of brand and market at JL client Appeel, says what he gets from the independent agency is “a focused alignment on our brand opportunity” and “consistency from a team that is ingrained in our business with the ability to make decisions with both precision and speed.” As part of “a rising tide of smaller start-up brands causing major shifts in their respective categories,” Appeel, which markets an edible-coating product can double the shelf life of fresh produce, found that “this momentum demands an equal and impactful transformation of how we have traditionally run our businesses and who we choose to partner with,” says De Turris.

Facing budget cuts and revenue declines, holding companies including Publicis Groupe, WPP, Omnicom Group and Dentsu have been forced to undergo layoffs, furloughs and salary cuts since the start of the pandemic. For the recent third quarter, WPP reported a revenue slip of 9.8%, Omnicom Group posted an 11.5% decline in sales, MDC Partners suffered a 17.3% decrease in revenue and IPG saw its sales fall 5.2%, while Dentsu reported a 10.7% decline in revenue for the first nine months of 2020.

“There’s never been more pressure on holding company creative agencies than there is now,” R3 Principal and Co-Founder Greg Paull says. “From in-housing, to the growth of independent agencies, to more and more low-cost production options, the challenge for holding companies, as always, is going to be driving greater creativity.”

The logic behind holding companies—and their big pitch to clients—is that they can provide one-stop shopping, from PR and data management to events, media buying and more. But the flip side is that a holding company is most successful when all its agencies are winning. So holding company agencies are incentivized to encourage clients to utilize other specialties of the holding company. This, says one independent agency executive, can lead to a creative shop that believes, say, a PR approach is the best solution for a client, being pressured to get other holding company agencies involved—for example, the shopper marketing agency—even though it is incongruous with the initial idea. Independents, he says, have no such encumbrances.

Indie agencies also say that they can turn work around faster because the founders are weighing in from the beginning on each account. “When you hire Terri & Sandy, you get Terri and Sandy,” says Greenberg, whose agency is poised to grow 30% this year. “That really matters. In these troubled waters, clients want people they know and trust. Big agencies [will say clients are getting top leadership], but we came from big agencies and it’s just simply not true. Unless you are the biggest account, you’re not getting the people running the agency on your business. That business is delegated down.”

Donna Noa, VP of marketing at Terri & Sandy client BJ’s Wholesale Club, says having “the opportunity to work directly with their most senior leaders” is a perk of working with the independent agency. “They are approachable and make themselves available so that we can adapt our strategy and take advantage of opportunistic moments to execute campaigns that are timely and resonate with our current and prospective members,” Noa adds.

In some ways, the pandemic has leveled the playing field for independent and holding company agencies. Greg March, CEO of Noble People, which calls itself a creative media agency, says what small independents have historically done well is launch new brands: “companies that are smaller and growing.”

“Let’s compare Charmin Toilet Paper to Uber,” March says. “Charmin already knows how to sell toilet paper so when they are hiring an agency, they don’t need much innovation. They need things done efficiently at a low cost. But if you’re a new emerging business, you need that innovation—the kind of thinking that comes from senior leadership. A 25-year-old doesn’t have enough experience to launch a new product. All of my clients are getting fewer people with more experience.”

March argues that in this COVID environment, every company, whether it is a legacy brand or in its infancy, is “emerging” right now, as many brands look for skills like e-commerce help as consumers stay home. “When you’re in a disruptive situation, you want to sit around a table with people with experience,” he says, claiming that at a holding company this is not commonly the case.

Julia Shapiro, senior director of marketing at Noble People client WeTransfer, says “the best part of working with an independent shop like Noble is that they feel like true partners. They get their hands dirty, digging into our unique business challenges, vs. just responding to briefs,” Shapiro comments, noting how the shop, free from holding company bureaucracy, is constantly able to evolve their strategy to “build teams that are as flexible and nimble as we need to be.”