Home Industry: For all marketersCutting the Corporate Cord to Trump = There’s extra cash out there 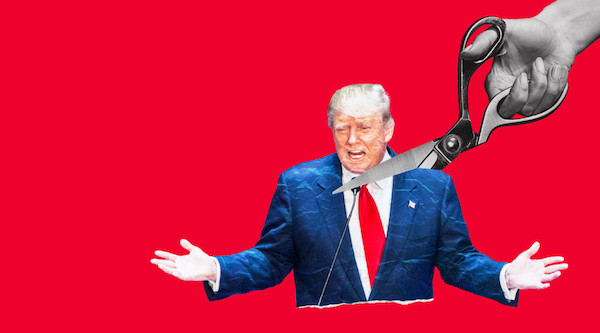 Steve’s breakdown: Say what you want but last Wednesday “is a day that will live in infamy”, to quote FDR, and corporate America is just not having it.

So where’s the new business lead?

It’s a moving target but there will be a lot of cash that’s not going where it was planned to go so “follow the money”. (To quote the 1976 docudrama film All the President’s Men)

Airbnb’s Jan. 11 statement: “Airbnb strongly condemns last week’s attack on the US Capitol and the efforts to undermine our democratic process. We will continue to uphold our community policies by banning violent hate group members when we learn of such memberships, and the Airbnb PAC will update its framework and withhold support from those who voted against the certification of the presidential election results.”

“Given the unacceptable attempt to undermine a legitimate democratic process, the Amazon PAC has suspended contributions to any member of Congress who voted to override the results of the U.S. presidential election,” the company told Popular Information late on Jan. 11.

The newsletter also reported that Amazon’s PAC has contributed over $600,000 to the 147 U.S. lawmakers who voted to overturn the election results.

“Last week’s attempts by some congressional members to subvert the presidential election results and disrupt the peaceful transition of power do not align with our American Express Blue Box values; therefore, the AXP PAC will not support them,” the company said in a Jan. 11. statement.

The retailer is suspending political contributions to the 147 U.S. lawmakers who voted against certifying the results of the presidential election, reported the Minneapolis Star Tribune.

“In light of this week’s violent, shocking assault on the United States Capitol, and the votes of some members of Congress to subvert the results of November’s election by challenging Electoral College results, BCSBA will suspend contributions to those lawmakers who voted to undermine our democracy. These contributions are made through our PAC, which is supported solely by employee contributions,” the company said in a Jan. 8 statement.

“While a contrast of ideas, ideological differences and partisanship are all part of our politics, weakening our political system and eroding public confidence in it must never be. We will continue to support lawmakers and candidates in both political parties who will work with us to build a stronger, healthier nation.”

Deutsche Bank will no longer do business with President Trump or his company in the future, according to The New York Times. Trump owes the bank more than $300 million, which is due in the next few years, per the Times’ coverage.

The massive chemical company has pledged to never again contribute financially to members of Congress who opposed the Electoral College vote on Jan. 6, according to Popular Information.

The social platform is freezing all political contributions to review its political spending practices, a spokesperson told Axios.

The bank is freezing all donations through its PAC while it conducts an assessment of “how people acted during this period,” a spokesperson told The New York Times’ DealBook.

Google has frozen all political contributions to “review and reassess” its policies, a spokesperson told Axios.

Hallmark, which contributed to Missouri Sen. Josh Hawley and Kansas Sen. Roger Marshall in the last election cycle, told Popular Information that it had requested a refund of its donations on the grounds that the senators’ recent actions do not align with the company’s values.

“Hilton condemns the lawlessness, violence and attack on American democracy seen at the United States Capitol last Wednesday,” the brand told Popular Information. “Due to the impact of the global pandemic, the Hilton Political Action Committee was suspended in March 2020 and remains suspended today. Historically the PAC has distributed donations equally across the two major political parties. As a direct result of recent events, Hilton will not be making political donations and will keep its PAC suspended indefinitely. We commit to any future donations being shared equally across the major parties and only after careful assessment of the recipient’s voting record.”

Intel told Popular Information that it “will not contribute to members of Congress who voted against certification of the Electoral College vote as we feel that action was counter to our company’s values.”

The bank has frozen all campaign contributions for six months, as reported by The New York Times.

“We have taken the destructive events at the Capitol to undermine a legitimate and fair election into consideration and will be pausing political giving from our Political Action Committee to those who voted against certification of the election,” a spokesperson told Popular Information.

According to Popular Information, the company said in an internal statement on Jan. 11 that it would be halting political contributions to all members of Congress who “voted to object to the certification of the 2020 election.”

The tech company told Popular Information on Jan. 11 that its “political action committee decided last Friday that it will not make any political donations until after it assesses the implications of last week’s events.”

On Sunday night, the PGA of America Board of Directors voted “to exercise the right to terminate the agreement to play the 2022 PGA Championship at Trump Bedminster,” said the organization’s president Jim Richerson in a video statement.

Signature Bank is closing President Trump’s two accounts, which total around $5.3 million, and is calling for the president’s resignation from office, according to The New York Times. A spokesperson also told the Times that Signature Bank “will not do business in the future with any members of Congress who voted to disregard the Electoral College.”

“Target is fully transparent about our PAC contributions. Our TargetCitizens PAC is funded through voluntary contributions from our team members and contributes in a bipartisan manner to a wide range of federal candidates and organizations. We know that there isn’t a single candidate who aligns completely with Target or our team members on every issue, which is why we rely on established criteria like a candidate’s impact on our business, committee assignments, and more when we make contributions. Consistent with our current practice, we WILL continue to review our giving criteria and PAC contributions on an ongoing basis,” the company told Popular Information.

“The assault on the U.S. Capitol and on democracy was unacceptable. T-Mobile has supported many elected officials in a bipartisan approach to advancing a policy agenda that keeps the U.S. on the forefront of wireless technology. In light of recent events, we intend to reevaluate our PAC giving, and we look forward to working with the incoming Administration,” the brand told Popular Information.