How spec work became a real client: Give it a try

Home Industry: For all marketersHow spec work became a real client: Give it a try

How spec work became a real client: Give it a try

Steve’s breakdown: As a new business professional my entire career, I’ve always have been in favor of doing spec work to get into certain clients board rooms. The fact is it works. For me personally, doing spec work got my agencies Coty, Romano’s Macaroni Grill, On The Border Mexican Grill & Cantina, Roll Royce Motor Cars, Bentley Motors and Grolsch Lager. Some of that spec work was print creative and some was research. Both work!

Here’s a story about how spec film creative worked for Wrangler.

PORTLAND, OR: It is not very often that a spec spot turns into a genuine ad for a brand, but Scott Pommier’s commercial for Wrangler did exactly that. He talks about his work with a tiny production team, including a football coach he found on Facebook, to turn his vision into a reality.

Produced by Untitled Films, the spot, entitled Long Live Cowgirls, follows a young girl learning a trick on her horse, before competing in her first rodeo. Scott Pommier‘s desire to tell this story was what kicked off the whole project.

It is filled with stunning shots showcasing the animal’s and rider’s skill, as well as the beauty of nature and the surroundings. Inspired by the story of the trick rider, written and directed by Pommier with Wrangler in mind, he reveals how this spec film became a real ad for the brand.

What inspired you about Wrangler as a brand to make a spec ad for them?

The story of the trick rider came first. But right away it felt like Wrangler had to be the brand.

What made you want to tell this kind of story?

The idea was to write the kind of script that I was hoping would show up in my inbox, something beautiful, emotional and universal. As complicated as our individual circumstances get, sometimes what we need to hear is as fundamental as “you gotta get back on the horse.”

When you made it did you intend for Wrangler to take it on as a real ad?

That was certainly the hope from the outset. I made an effort to contact both Wrangler and their agency of record before production but, wasn’t able to establish much of a dialogue.

The shoot was broken into two halves, a few days at a live rodeo event and the rest at the ranch. After shooting the rodeo footage I put a treatment together with some screenshots and was able to get it in front of the right person at Wrangler. That was enough to prompt them to send me some clothing for the rest of the shoot, the project was finally on their radar. I was given one note, and that was to make sure that the clothing was featured prominently which sounded fair enough to me.

I had a feeling that if I was ever going to sell a spec film, this would be the one. 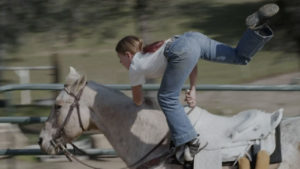 What were the greatest challenges in making this ad?

To say that this was a small production is not only an understatement, it stretches the definition of the term “production.” When I shot the rodeo portion it was just me and a photo assistant who I taught to use a sound recorder. For the shoot at the ranch there were three of us.

It was mainly the director of photography

Alex Bros and myself. I’d worked with Alex a few times; he works primarily as a 1st AC but I had a lot of confidence in what he could do if given the opportunity. Our only other crew member was a local football coach who had responded to a Facebook post. On the days he showed up, he was our boom operator.

In front of the camera we had a young girl who had never acted before and on top of that we were shooting stunts involving animals. So, lots of challenges all around. Given all that, I think you’d have to say that things went pretty smoothly.

The days were long, but there was a spirit amongst this small team that we were making something that had real potential. Even though we were working small, it was apparent that what were capturing within the frame lines was special.

What were the challenges and joys of working in close proximity with animals?

I’ve shot with horses a few times and these guys were much more tolerant and adaptable than most. One of the challenges was that these horses are very quick to pick up new skills. We’d be shooting a sequence where Ava, our trick rider, was falling off and after a few takes her horse Comanche would start to anticipate the fall and come to controlled stop. Other times we’d have to try to coax some of the bad behaviours we were after with treats.

The joys are what you’d think. Horses are beautiful and powerful. They have a real presence and personality. 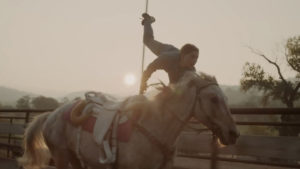 What was the stand-out highlight moment of the shoot?

We’re about to shoot the scene where Ava performs her “one-legged stand” for the first time. With the way the action and the music are meant to fit together, this is the most important shot in the film.

It’s the end of the last day of shooting. It’s our only chance to get the shot. The sun is setting. It is beautiful, and we’re minutes away from to losing the light, and when we do it’s going to drop from a 10/10 all the way down to a 2.

I’m sitting on an idling Honda 4-wheeler. Alex is sitting back-to-back with me. He has a rope for a seatbelt and his camera on his lap. We’ve just completed our first attempt at the shot and it did not go well.

I’ve done similar kinds of shots. And I can tell you that even with seasoned pros it takes a few runs to figure out the cues, and the timing. I’ve got a ten-year-old balancing on one foot on a nervous horse, we have to take off from a dead stop, she’s got to get the horse up to a full gallop, get into her trick hold it for a few beats then get out of it safely, all in a couple of hundred feet.

And somehow Alex and I need to keep all of that in the frame, shooting on a fixed 50mm lens. There’s no way.

I tell Alex “Let’s break out the sticks and shoot it telephoto” and as I’m saying it, I know that not only is the shot not as strong, but by the time we swap the lens out and find our spot the light will be gone. I’ve imagined shooting this exact moment for the better part of two months, but for reasons out of our control we’re starting to pull all this together about ten minutes too late. I can feel it slipping away.

Alex says “We’re setup to shoot it like this, let’s just try it.” Only I don’t even know what adjustments to make. It feels impossible. I realise that we’re living the story of the film. As a crew we are at the same point in the story as the hero.

I cue Ava and gun the four-wheeler. We get up to speed and I start to drift closer to the galloping Comanche. Somehow I manage to keep Alex within range as Ava gets into the trick. It’s just magic.

It’s what we love about filmmaking. On the good days the effort we put yields these perfect little moments. 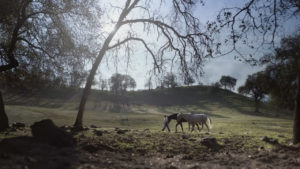