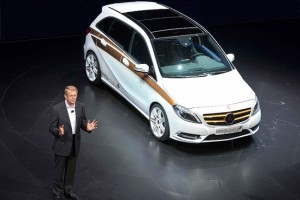 Steve’s breakdown: Here’s an example of a company that is crying out “we need marketing help!!” And I don’t think these new offerings are going to their AOR so put Mercedes on the hit list. BTW, this story also calls back to a story we reported on about their Smart Car.

MONTVALE, NJ: Thinking small has never been Mercedes-Benz’s forte, but the German luxury-car maker is counting on a new generation of Mercedes compact cars—this time headed for the U.S.—to become a cornerstone of future sales gains.

Thomas Weber, head of development at Mercedes, showed off a B-Class concept car on Tuesday in Frankfurt.

The first of its revamped and expanded small cars, a retooled, sleeker Mercedes B-Class compact, is one of several small-car debuts at this week’s Frankfurt Motor Show, including Volkswagen AG’s new Up minicar and Fiat SpA’s refreshened Panda hatchback.

Landing in European showrooms this fall, the B Class is the first pillar in Daimler AG’s strategy to boost Mercedes compact-car sales after middling results so far. The car maker has struggled to generate much of a profit from its current A and B classes. Their boxy designs have failed to lure younger car buyers as BMW’s Mini and other luxury rivals have.

But while big sedans and sporty roadsters drive luxury-car makers’ profits, Mercedes wants vehicles to introduce younger drivers to the brand. The average age of U.S. Mercedes drivers is 53, four years older than their BMW and Audi counterparts, according to researcher J.D. Power and Associates.

Younger buyers not only broaden the customer base, they often trade up eventually to more expensive models, said Ian Robertson, BMW’s sales and marketing chief, who points out that more than 70% of 1-series drivers are new to the Bavarian luxury-car maker.

Small cars will be essential to meeting tougher emission standards coming in Europe and the U.S. “Without small cars it becomes very tough, especially for the German luxury makers,” whose bigger, high-octane car sales drive up their fleet-average emissions, said Tim Urquhart, an analyst at researcher IHS Automotive in London.

To boost its small-car profile, Mercedes plans a sportier version of its A-Class hatchback next year, followed by a small coupe, a compact sport-utility vehicle and another, still undisclosed, compact model. It also has poured $1.9 billion into a new Hungarian plant and expanded capacity in Germany to build the cars.

For the first time, it will sell at least one of the small cars in the U.S. by 2013, possibly the B Class, Mercedes executives say. That could prove tough, industry watchers say: Apart from BMW’s Mini, few small premium cars have resonated with American drivers, who tend to equate luxury with size.

Daimler Chief Executive Dieter Zetsche acknowledged the car could be a tricky sell. “There is perhaps in the U.S. a somewhat smaller openness to premium compact cars,” he said, though pointing to Mini’s relatively strong U.S. sales as evidence of the potential.

But insists Joachim Schmidt, head of sales and marketing at Mercedes-Benz, “Our U.S. dealers tell us the time is ripe.”

To broaden its small-car appeal, Mercedes-Benz has loaded the more sleekly designed B Class vehicles with Internet access, iPod connectivity, a radar-controlled prevention system and other high-end gadgetry that until now was reserved for its bigger, more expensive models, such as the S Class.

It has lowered its production costs with new front-wheel drive that will be used across the entire small-car range and more shared technology with its larger model segments.

“The new A- and B-class will definitely be profitable,” Mr. Schmidt said. 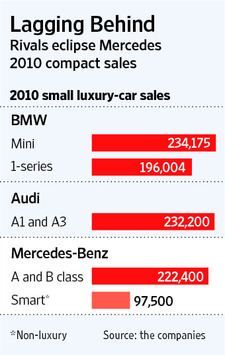