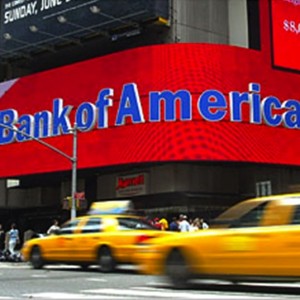 Steve’s breakdown: With what the Occupy Wall Street movement did to B0fA, it’s no wonder they are looking to polish up their image.

NEW YORK, NY: Besieged Bank of America has launched a global review of its marketing communications agencies, sources said. The Charlotte, N.C.-based company, which spends an estimated $2 billion globally on its communications, spent $284.5 million in measured media in 2010, per Nielsen. In 2011, from January through September, Bank of America spent $161.2 million. That data does not include Internet or business-to-business marketing. In 2006 Bank of America consolidated its business at Omnicom, with the company’s BBDO network becoming the lead on its U.S. consumer retail business. (The bank had previously workedwith Interpublic, where 16 of the holding company’s operating units handled its marketing.)  Currently, non-Omnicom agencies also work for BofA: IPG’s Hill Holliday handles the bank’s upscale operating units like Merrill Lynch and U.S. Trust while Publicis’s Digitas and WPP’s Brand Union consultancy are also onboard. Those four agencies have been invited to participate in the review along with some additional, unidentified non-roster shops.

The review does not include Bank of America’s media agencies. Sources said Anne Finucane, Bank of America Corp.’s global strategy and marketing officer, is leading the process and the review covers marketing communications she oversees.

Bank of  America’s public image has suffered since the housing market collapse in 2008 and subsequent government bailout. More recently, in November, Bank of America dropped plans for a controversial $5 fee on its debit cards in the wake of consumer protests. After the bank announced plans for that charge, President Obama asked whether the lender has an “inherent right” to charge the fee while other politicians like U.S. Senator Richard Durbin (D-Ill.) told Bank of America’s customers to “get the heck out of that bank.”

Bank of America is launching the review after selling off non-core assets like its credit card business in Canada as it renews a focus on its customer base, sources said.