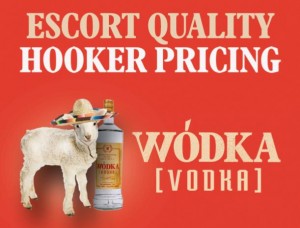 Steve’s breakdown: Yep! That’s the line of the another ad in this Wodka vodka campaign. Is this a new business opportunity? Maybe if you can come up with a string of similar lines that don’t offend millions.

NEW YORK, NY: Less than 24 hours after making its debut alongside a Manhattan highway, Wodka vodka’s anti-Semiticky billboard has been pulled down and converted into a “crumpled heap near the road,” the New York Times reports.Now how will sophisticated dogs learn about America’s hottest cheap-as-the-Jews spirit?

Perhaps through buzz marketing—which is different from shock marketing (helpfully defined by the New York Times as “intended to draw attention by generating controversy”—thanks for the clarification, guys!), which was not what the dog billboard was about at all. It was about being funny. “We thought people would perceive [the billboard] as ‘ha ha quirky,'” says Brian Gordon, who runs the company that designed Wodka vodka’s billboard campaign. “But people perceived it as offensive, and because of that, we pulled it.” Gordon, the New York Times notes, “was quick to point out” his own Jewishness.

The dogs themselves couldn’t be reached for comment, but over on the company Twitter you can find a picture of the “Jewish” dog posing in a different ad with Jonathan Cheban. There’s also this sheep wearing a sombrero standing near a Wodka bottle, and a “black Russian”—a black man wearing one of those fuzzy Russian hats. Edgy! Too bad all you sensitive PC types out there don’t understand such creative marketing vision.