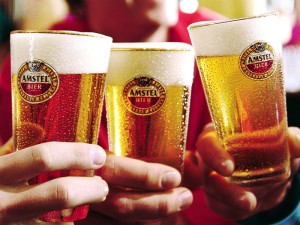 Steve’s breakdown: There have been so many changes at Heineken I just think they are looking for something different. Something that they will get lucky with. Either way, it’s a great brand with room to grow.

“The Richards Group was a valued partner for the Amstel Light brand,” Colin Westcott-Pitt, VP Marketing for Amstel, Dos Equis and Newcastle, told Ad Age in a statement. But “Amstel is entering a significant period of brand development with the introduction of Amstel Wheat into the U.S. market, and the timing is right for us to move in a new direction. The decision to part ways was amicable between both parties. We’ve identified potential partners, but have not yet named a new agency of record.”

Richards Group — which will not defend the account, in keeping with a longstanding agency policy — said: “We were pleased to bring our years of experience in the beer category to our work for Amstel Light, and we wish them the very best going forward.”

The importer spent $10 million in measured media on the Amstel brand in 2010, according to Kantar Media. Although Amstel Light has high name recognition, it is a relatively small player in the import segment, commanding less than 1% share as of May, according to SymphonyIRI, which excludes Walmart and liquor stores. Heineken Light, which was introduced in 2006, had 2.28% share, according to IRISymphony.

When Richards took over the Amstel account in 2008, it sought to play up the brand’s Amsterdam roots with a campaign that included scenes from that city’s legendary, lawless party scene over the tagline “Dam good bier.” But the tagline was recently ditched, as the importer revived “The Beer Drinker’s Light Bier” tagline. That slogan, which last ran in 2004, is meant to position the brew as a light beer that tastes like a full-flavored beer.

The new agency will come on board as the importer expands Amstel Wheat, which was introduced on draught in select markets late this summer. The European-style wheat beer is described as “rich with fruit and floral notes and a subtle tease of freshly baked bread, while the taste is slightly fruity with soft hoppy undertones.”

Heineken USA plans to grow distribution next year beyond the original seven test markets, which include New York and Chicago. Plans call for bringing Wheat to at least 31 markets next year.

The review is the latest change under Chief Marketing Officer Lesya Lysyj, who joined Heineken USA in February. In May she moved the importer’s flagship Heineken and Heineken Light brands to Wieden & Kennedy, New York. The brands had been at Euro RSCG, which still has the Dos Equis brand.