Steve’s breakdown: WOW! We all knew this was going to happen but not for another generation. How ever you thought it was going to go down, it doesn’t matter now. Just contact Selected Resources International and get in this pitch!

SALISBURY, MD: Poultry company Perdue has ended its 40-year relationship with Deutsch and its predecessor shops, opening up its creative account for review, as well as digital planning and buying handled by RJ Palmer, social media handled by PR firm Fleishman Hillard, and possibly the website work at Marriner Marketing. The consultancy SRI is overseeing the review.

RJ Palmer will continue to be agency of record for traditional media planning and buying. Fleishman-Hillard has been invited to participate in the review.

The company said it is looking to consolidate marketing duties at one agency. “Perdue Farms is conducting a search for a strategically based, highly creative and innovative lead agency to handle our integrated traditional and nontraditional (digital/social media) advertising and communications,” Perdue spokeswoman Julie DeYoung said in a statement to Ad Age. “The motivation for the search is to consolidate marketing services for greater integration and efficiency.” 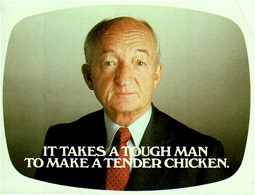 Deutsch’s New York office had been working on the account through the 2009 U.S. merger with Interpublic sibling Lowe. The account had been with Deutsch and its predecessor shops for 40 years; Frank Perdue in 1971 hired Scali, McCabe, Sloves. Ad Age named Scali McCabe’s “It takes a tough man to make tender chicken” as one of the Top 100 advertising campaigns of the 20th century.

“We greatly respect Jim Perdue and the heritage of quality the Perdue brand has always delivered,” said Val DiFebo, CEO, Deutsch, New York. “We are proud of our recent campaign ‘We believe in a better chicken,’ which has exceeded all expectations across the board, resonates with consumers and has given the company a new rallying cry and will continue to be implemented by the new agency. We wish them well.”

Deutsch in late June had launched the new campaign for Perdue. But a person familiar with the matter said the account went up for review due to fair compensation constantly being a debate.

This is the first loss of 2011 for Deutsch’s New York office. Recent wins include the Microsoft Office 365 and Dynamics brands. Deutsch’s Los Angeles office in late June lost the CiCi’s Pizza account.