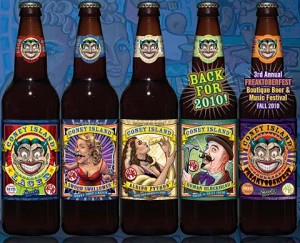 Steve’s breakdown: These guys are on a roll and cool packaging works but eventually they are going to make the sobering commitment to marketing. Be there when they do.

Coney Island Barrel-Aged Human Blockhead® joins the Shmaltz line-up as the third member in the Limited Engagement Barrel-Aged series, which also includes 2010 Great American Beer Festival Silver Medalist HE’BREW R.I.P.A. on Rye; 2011 World Beer Championships Gold Medalist HE’BREW Vertical Jewbelation; and HE’BREW Genesis 15:15, a 15% ABV barleywine brewed with grapes, figs, dates, and pomegranates, which will be released Fall 2011. The Limited Engagement Barrel-Aged series not only represents some of Shmaltz’s most decorated beers, but also boasts the highest consumer ratings from BeerAdvocate.com and RateBeer.com. The latter recently ranked Shmaltz Brewing as one of the “Top 100 Brewers in the World” for 2011. With the release of Barrel-Aged Human Blockhead®, Shmaltz Brewing continues to design unique and sophisticated beers that can stand with the world’s best specialty beverages.

In a fusion of Old World brewing tradition with bold, flavor-driven American ingenuity, Coney Island Human Blockhead® and Barrel-Aged Human Blockhead® are examples of how Shmaltz has elevated lagers to the creative peaks ales have enjoyed in the American craft beer movement. After selecting Coney Island Craft Lagers® as “Best in Show” at their inaugural BevStar Awards, Beverage World Magazine noted that “in a segment largely dominated by ales… Shmaltz has demonstrated how creative one can be when pushing the limits of lager.” The Chicago Tribune also praised Shmaltz’s artistic vision and pioneering spirit in a recent article, declaring that “the Coney Island series has put [Shmaltz] on the leading edge of craft lagers.” Not surprisingly, Coney Island Human Blockhead® has garnered top awards across the country since its debut in March 2009. In its first bout against other strong lagers at the 2009 United States Beer Tasting Championships, Human Blockhead® took home the Gold Medal and then was designated the Bock/Doppelbock Grand Champion the following year at the World Beer Championships.

Like the other beers from Coney Island Craft Lagers®, Human Blockhead® pays tribute to the eclectic performance culture of Coney Island, New York. The Human Blockhead stunt, developed by renowned musician and sideshow entertainer Melvin Burkhardt, is kept alive today by Donny Vomit, whose persona is captured on the Human Blockhead® bottle label. Known for spellbinding stage antics with his trusty hammer, sixty-penny nail, and occasionally a power drill, Donny is thrilled to be featured in the Coney Island Craft Lagers® line. “As a kid, I always thought it would be cool to have an action figure made after me, but having a kickass beer is a whole lot better,” says the man behind the mustache.

About Shmaltz Brewing Company
Shmaltz Brewing Company was recently named “Best American Craft Brewer” and won the “Best In Show 2010” title by Beverage World Magazine, after being named “Breakout Brand” for 2009. Shmaltz was also included in the “Top 50 Fastest Growing Bay Area Companies” by San Francisco Business Times, and is a recipient of the “Distinguished Business Award” by the Brooklyn Chamber of Commerce.

Established in San Francisco in 1996 with the first batch of 100 cases of HE’BREW Beer® bottled, labeled, and delivered by hand, Shmaltz has sold more than ten million bottles of beer to date. Along with their acclaimed line of HE’BREW Beers®, Shmaltz introduced its new line of sideshow-inspired Coney Island Craft Lagers®. Proceeds help Coney Island USA, a 501(c)(3) Non-Profit fulfill its mission to defend the honor of lost forms of American popular culture in Brooklyn’s historic Coney Island neighborhood.

Shmaltz offerings are available in more than 25 states through 30 wholesalers at more than 3,000 retail specialty shops across the U.S., including Beverages & More, Whole Foods, Total Wine, select Krogers and Cost Plus.