Steal every client this digital company has

Home Blood in the WaterSteal every client this digital company has

Steal every client this digital company has

Steve’s breakdown: Time to steal every client Shadow has, the company that created the app that trashed the Iowa caucuses. They mostly handle democratic clients so if you can deal with that, it’s open season for their clients.

NEW YORK, NY / DENVER, CO: The problems aren’t over for the app that caused so many problems for the Iowa caucuses Monday night.

The Democratic Party in Nevada is set to use the same technology for its own caucuses on Feb. 22, CNN has confirmed.

“Not a great day to be the person in charge of that at the Nevada Democratic Party,” said an aide to one of the presidential candidates.

The party did not return a request for comment.

As HuffPost first reported Monday night, the Iowa Democratic Party paid the company Shadow more than $60,000 to develop an app that was supposed to make it easier and quicker for precinct officials to transmit caucus results.

But that process didn’t quite go as planned. Numerous Democrats reported major problems in attempting to download the application and upload results, with many saying they resorted to calling the results into an overloaded and unresponsive hotline at state party headquarters in Des Moines.

The Iowa Democratic Party still has not released any caucus results, and it’s not clear when it will.

And even before Monday night’s problems, cybersecurity experts raised concerns that the smartphone technology was not secure enough to use for something as sensitive as election results. The state party also refused to release the name of the app developer or what security measures it was undertaking, claiming it would make it more vulnerable to hackers.

Gerard Niemira, a veteran of Hillary Clinton’s presidential campaign, is the head of Shadow. In 2019, the Democratic digital firm Acronym acquired Niemira’s company, which then was turned into Shadow. Niemira has not returned a request for comment.

Acronym spokesman Kyle Tharp put out a statement early Tuesday morning distancing the group from Shadow, saying that Acronym is merely one of the investors in the for-profit company.

But in Democratic digital circles, Shadow and Acronym are widely considered to be one and the same. And in January, Acronym tweeted out an announcement saying it was launching Shadow: 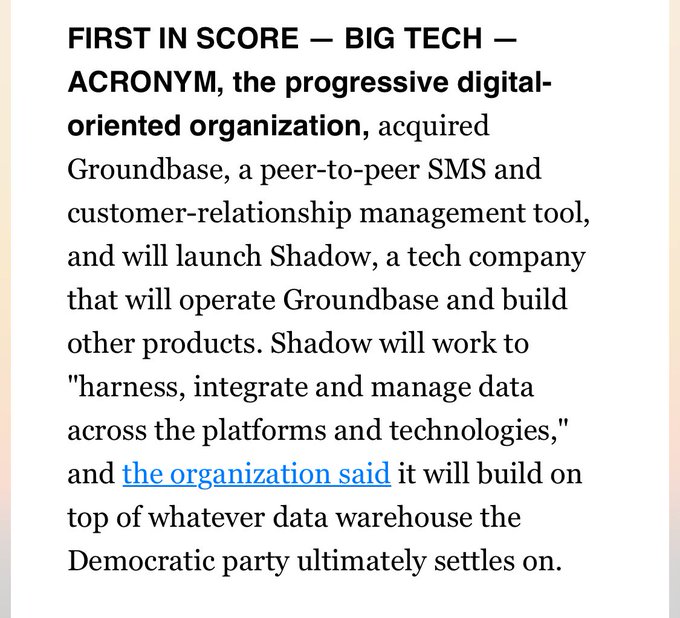 David Plouffe, one of the chief architects of President Barack Obama’s campaigns, joined the board of Acronym in September. Coincidentally, he was on MSNBC last night commenting on the Iowa results and was asked about Shadow. He, too, tried to distance himself from the chaos.

“Acronym is an investor in Shadow. Shadow’s got its own board of directors. So in my relationship with Acronym, which has been going on for a few months, I have no knowledge of Shadow,” Plouffe said, adding he had no idea who developed the app.

Niemira previously served as chief technology officer and chief operating officer of Acronym, according to his LinkedIn page.

Iowa Democratic Party Chair Troy Price said in a statement Tuesday morning that the results were delayed due to an issue with the app. What’s more, he said, pre-planned backup measures took longer than expected.

“While the app was recording data accurately, it was reporting out only partial data,” Price said. “We have determined that this was due to a coding issue in the reporting system. This issue was identified and fixed.”

The party used paper documentation from the caucuses to verify that the data collected by the app is “valid and accurate,” Price said. He added that the party hoped to release the caucus results “as soon as possible today.”