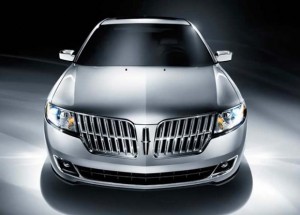 Steve’s breakdown: Here’s the plan: Take the “engaging to drive” from BMW and then add the refinement of Lexus and you get the new Lincoln. OK . . . My advise is they get some messaging help for that because is sounds like a recipe for every luxury car ad I’ve ever seen!

DEARBORN, MI: Now that Ford Motor Co. has escaped from the grip of recession and projects a doubling of vehicle sales by mid-decade, the second-largest U.S. auto maker is making a revival of its ailing Lincoln luxury brand its top priority.

Later this year, Ford will begin a sweeping make-over of the 96-year-old brand, to give staid Lincoln a new identity as a producer of high-tech, understated luxury cars, Ford executives said.

The first look at Lincoln’s future will come in November when Ford unveils redesigned versions of its MKS sedan and MKT sport-utility vehicle, the first of seven new or redesigned Lincolns. The MKS will feature a sleeker design, self-tuning suspension system and hands-free controls and entertainment system.

“Lincoln will give [customers] opportunities to tell a story about what is unique in their vehicle,” said Derrick Kuzak, Ford’s head of global product development, in an interview. “You think of BMW as engaging to drive; you can think of Lexus as refined. Bring them together and it is a new experience no customer has ever had.”

Lincoln will be aimed at technology-loving, upscale consumers that Ford believes make up an increasing portion of the luxury-car market, Mr. Kuzak said. Affluent professionals who tend to value experiences, such as exotic vacations, over the bling of big-name luxury goods can be lured away from other luxury car brands to Lincoln, Mr. Kuzak said.