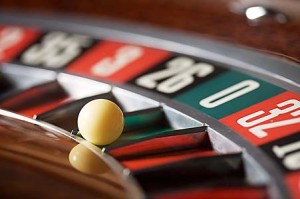 Steve’s breakdown: We might be getting ahead of ourselves on this one but that’s how it goes in the casino biz. In fact, it’s news like this that helped me win the Mount Airy Casino Resort account last year. Anyway, keep an eye on both sides of this story because once Illinois Gov. Quinn signs or doesn’t sign the new bill, there’s going to be some major marketing movement in the area. Be ready!

“They’re going to lose a lot of business. I know where I’m going to go,” said Blosic, 43, a one-time member of Horseshoe’s Diamond high-rollers’ club, who makes the 45-minute drive from his home in Andersonville to Horseshoe two to three times per month.

How much a massive expansion of casino gamblingpassed by Illinois legislators this week might hurt Horseshoe and the four other northwest Indiana casinos is up for debate.

The skyline of Chicago is clearly visible from the Horseshoe dining room, and nine out of 10 cars parked in the ramp on Thursday sported Illinois plates. All told, the five casinos generated nearly half a billion dollars in tax revenue in 2010.

Five casinos are strung along the Lake Michigan shoreline in some of the Hoosier State’s most economically depressed communities. Ball State University economist Mike Hicks says at least one casino likely would be shut down by increased competition. Some 80 percent of gamblers visit casinos once or twice a year, and choose newer, glitzier options, Hicks said.

“Even a new upgrade is going to look hangdog and worn in comparison to a new casinoin Chicago,” Hicks said.

Horseshoe spent $400 million to build a brand-new “boat” that is essentially a floating building just three years ago, an investment Hammond Mayor Thomas McDermott Jr. said was made with the prospect of a downtown Chicago casino in mind.

“We wanted to build something that was Chicago-proof,” McDermott said. “I think it’s the best option outside Las Vegas.”

Industry analyst Ed Feigenbaum of Indiana Gaming Insight said Indiana caters to working-class gamblers who can be loyal to casinos that provide the best comps — free lunches, hotel rooms or other items given away to regular patrons. While revenues may drop, the industry will remain solid, he said.

“The worst thing that could happen for them is for a casino to open up right in Chicago,” he said.