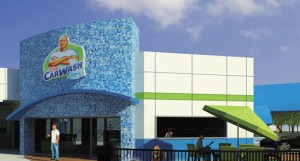 Steve’s breakdown: I’ve never been a fan of P&G but this idea is brilliant and they have the pockets to pull it off. In addition to Mr. Clean Car washes they are doing Tide Dry Cleaners. So there’s two great advertising opportunities in one post!

CINCINNATI, OH: One of the most recognizable names in household cleansers is looking to expand its car washing business and is eyeing Baltimore for growth.

Mr. Clean, the bald-headed front man for a host of Procter & Gamble  products, has put his likeness to a chain of Mr. Clean Car Washes, with locations in Atlanta, Cincinnati and Round Rock, Texas.

The company has tapped KLNB Retail in Towson to help it scout out Greater Baltimore for new franchise locations, preferably near national retailers like Whole Foods, Target and Home Depot, according to marketing material.

Officials from Procter & Gamble could be not reached for comment.

Mr. Clean’s looking for properties to buy here in the region and also is seeking potential franchisees, the marketing brochure said. The car wash chain is operated by P&G subsidiary Agile Pursuits Franchising Inc., which opened its first Mr. Clean car was in 2007.

The locations should be in areas with an average income of $90,000-plus, have a population of 250,000, and be near large office and industrial businesses, according to KLNB. Potential properties should be at least an acre in cities like Baltimore or 1.3 acres in suburban settings.

The company’s expansion into Baltimore could be good news for area nonprofits. With its recent expansion into Round Rock, the company committed to donating up to $50,000 to up to 20 partnering organizations. The facilities use green technology and employ about 50 people, according to promotional material released with the opening of its Round Rock car wash.