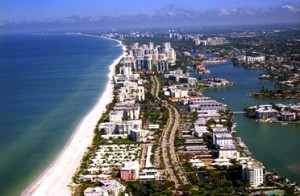 Steve’s breakdown: The bad news is things are still up in the air. The good news is they are talking about adding $800,000 to the marketing budget. We don’t like to talk about “blood in the water” when it’s the agency’s blood but that’s the situation here. Swim around and watch what happens.

Collier County commissioners Tuesday will be asked to approve a change order that would give Paradise Advertising and Marketing $800,000 toward additional media and production.

The change order is consistent with the St. Peterburg-based company’s contract and will cover any expenses over the annual $2 million contract, said Jack Wert, the county’s tourism director.

The contract — approved by commissioners in March — states that any costs over the $2 million spending cap be billed to reflect a 15 percent commission.

Paradise had billed the county more than $1.7 million this fiscal year for advertising through May 18, and the company was expected to reach its $2 million contractual spending cap this month.

“It is a very standard thing,” Wert said. “All this is is the paperwork step that we needed to take (to get) the additional funds that were approved in December.”

Commissioners in December agreed to use $1 million from the county’s beach park facilities fund for “enhanced tourism destination marketing.”

Staff members at the time recommended that $800,000 of that be used to enhance winter, spring and summer advertising as part of the Paradise contract.

Hiller declined to comment on the change order Monday and instead referred the Daily News back to the comments she made during the June 27 tourism development council meeting.

Hiller at the time said she had serious concerns about the request, and didn’t have enough information to support the change.

Paradise has handled the county’s advertising since 2003. The most recent contract was unanimously approved in February, but Hiller later asked that the contract be reconsidered. When the contract came back in March, she changed her vote, citing many concerns.

One of those concerns was that Paradise made two donations to tourism-related, nonprofit organizations in Collier County, which she believed created the appearance of a conflict.

Commissioners also are scheduled Tuesday to vote on:

■ A law that would restrict fertilizer use as a way to stem nutrient pollution in lakes and canals, where it can cause harmful algae blooms.

The proposal would require no less than 50 percent slow-release nitrogen, prohibit phosphorus fertilizers in most cases, limit fertilizer to four pounds per 1,000 square feet per year, set a 10-foot no-fertilizer buffer around waterways and prohibit all fertilizing in August and September.

■ A maximum tax rate for fiscal 2011-12 and to set tentative dates for budget hearings in September. County staff is recommending a general fund maximum tax rate of $3.56 per $1,000 of taxable value. That’s the same rate as the current fiscal year.

■ Plans for a county park along the proposed Gordon River greenway, a network of trails and boardwalks between Golden Gate Parkway and U.S. 41 East. The park, along Goodlette-Frank Road between the Naples Zoo and the Conservancy of Southwest Florida, has been panned by critics who say its parking lot, drainage system and trails aren’t eco-friendly.