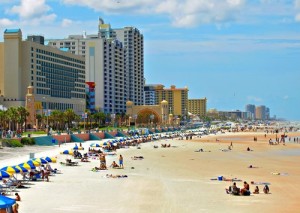 Steve’s breakdown: With a $5 to $7 million budget for advertising, the Halifax Area Advertising Authority has the resources but not the cooperation to gets things done right. Maybe with the recent firing of the CEO, they can get their act together . . . and hire an ad agency.

DAYTONA BEACH, FL: Members of the Halifax Area Advertising Authority will gather in an emergency meeting Monday morning to regroup after a messy and public parting of the ways with their head tourism marketing executive last week.

The now deeply fractured board must decide how to go about replacing Janet Kersey, fired Wednesday as president and CEO of the Daytona Beach Convention and Visitors Bureau, and determine how to move forward with the business of promoting the area’s assets to visitors.

Board Chair Ted Doran, an attorney in Daytona Beach, and board member Rich Larkin, general manager of the Hilton Daytona Beach Oceanfront Resort, hope to see a nationwide search for someone to replace Kersey, although rules require the position to be advertised in-house first.

The ideal candidate for the new president would be the head of a convention center in a midsized market like Daytona Beach, Larkin said, or a second-in-command in a large market like Orlando.

The candidate needs to be someone who can bring visitors in the slow season between August and December, be it leisure or convention business, Larkin said. He emphasized it’s not an “either or” decision for him.

“This destination is going backwards at this point, and A1A looks terrible,” he said, “and until we get some (tourist) business here, we can’t open (new) businesses.”

The desire to attract more tourists and a decades-old rift over marketing priorities — leisure tourists versus conventioneers, for example — are among the reasons why many insiders say the decision to fire Kersey took root long before a series of angry public email exchanges in recent weeks. The controversy began even before she was selected for the job in March 2010.

And though it played a part, the firing wasn’t just about how some board members perceived the way Kersey and her staff handled a request to host the 2017 International Shriners Convention, board members and other key players said last week.

That was just “a little thing,” County Chair Frank Bruno said. “That’s what brought everything to a head.”

That “everything” was more than two years of discussion over the roles of the advertising authority, convention bureau and Ocean Center, given the rapidly deteriorating beachside.

Many hotels are in foreclosure or disrepair, average daily room rates have plummeted, and businesses are departing the key business district along State Road A1A.

The Shriners convention debate served as a catalyst, but Kersey’s firing may not serve as the panacea. HISTORY OF CONFLICT

At its deepest roots, the issue is one of control over more than $5 million the authority uses to advertise the Daytona Beach area and attract hotel guests. Those guests pay the nightly bed tax that funds the budget. Volusia County has three separate taxing authorities responsible for advertising and marketing three distinctly different regions.

Given the economic recession and cuts taking place elsewhere in the county budget, the County Council in 2009 started asking probing questions about how the authorities worked and spent their budgets. In total, the three boards collect more than $7 million annually.

The council reorganized the boards of two authorities that year: Southeast Volusia and West Volusia, giving each a set of marching orders.

At the time, county records show the council also voiced concern about the Halifax authority, its bureau and budget.

Council members wanted more focus on attracting overnight visitors and help with marketing the Ocean Center, where the county was undertaking an $82 million expansion.

Wagner said he found 25 years of politics among various factions of the local hotel and tourism industry.

In February 2010, the authority voted to promote a 20-year veteran of the convention bureau — Kersey — to replace its retiring chief executive.

The decision, just two weeks before the County Council was scheduled to make new appointments to the authority, incensed Wagner and bothered others on the council. Wagner said the decision to hire Kersey without advertising the position on the outside or accepting other applicants lacked “transparency.”

He raised the issue at the March 4, 2010, council meeting and a 45-minute discussion ensued on several facets of the authority.

Council members Joie Alexander and Jack Hayman echoed Wagner’s concerns and the council delayed appointing new board members to wait for a clarification on the authority’s structure. The council voted unanimously to send a letter to the HAAA board asking for a more public process in hiring the president.

County Manager Jim Dinneen said the council could consider a different process for reviewing and approving the authority’s budget.

A month later, the council asked for an audit of authority spending. It wasn’t clear last week whether that audit was ever completed; however, county officials said the authority’s budget is audited annually as part of the county’s overall audit.

The council’s concern over the budget and how the authority markets conventions and the Ocean Center continues to influence the debate, heavily.

Two former board members who spoke in Kersey’s favor Wednesday also cited concerns about devoting money for the Ocean Center. Some hoteliers fear too much focus on the convention market would take away from efforts to promote the area to leisure tourists.

“If you ruin the leisure market, you will absolutely get hammered in the tax collections,” said Larry Fornari, a former authority chairman. “You do not know what you are doing.”

Others share similar concerns about the county, including Deborah Boyd, who was with the Southeast Volusia Advertising Authority for eight years before resigning from her position as director in May. Boyd said last week she sees council politics as influential in what happened to her and to Kersey, and with the West Volusia tourism authority.

Boyd wonders if there is a grand plan for one director for the three ad authorities.

Council members say there is no grand plan to take over the authorities but they have questioned why the convention center and the Halifax authority have separate marketing departments courting conventions and suggested they be combined.

The county expects to hire a national company to conduct an analysis of tourism marketing countywide later this year.

Councilwoman Pat Northey, whose Southwest Volusia district seat doesn’t get an appointment to the Halifax authority, said it feels like the advertising authorities are operating “pre-Disney.”

“We need to get up to speed,” Northey said.

Is the county interested in getting the tourism ad authorities to help attract business to the Ocean Center? Yes, said Northey. “It is in everybody’s interest for the Ocean Center to be successful.”

Larkin said it’s “critical” for the Halifax authority and tourism industry to find a better balance between leisure travel and convention business.

It could “fill the slower months in the off-season so we have more of a level occupancy throughout the year,” Larkin said Thursday. “That’s good for everybody. It’s good for restaurants, retail and hotels.”

The previous board of the Halifax authority, the one that hired Kersey, also drew heat for other decisions several times. For example, the board voted last year to roll a $150,000 pledge to the London Symphony Orchestra back into its budget when the planned symphony visit fell through. Some in the community wanted the money to go to the Community Cultural Foundation to help pay the debt for the American Music Festival.

It was, in part, that sense of autonomy that influenced the County Council to reconfigure the board earlier this year. Only 5 of the 11 board members were reappointed. Almost immediately a 6-5 split emerged. The new majority pushed for a new direction.

Leading the charge was Doran, a strong personality who has served as the attorney for the Volusia School District for years. Some of his fellow board members and others said he was rude and obnoxious.

Doran and others said Kersey’s loyalties remained with former board members and the old regime.

Northey and others said those personality issues “cloud the bigger issue, which is the debate over how to market the area.”

It remains to be seen whether the board — split 6-5 on Doran’s election as chairman and on Kersey’s firing — can come together to get the business done.

“Emotions are running high. It’s going to take big boys and girls sitting down together to figure this one out,” Northey said. “There’s a lot of anger and hard feelings out there right now. They’ve got to put that behind them.”

Board member Manoj Bhoola, who has been among the five minority votes, sees the board going downhill in the future.

The moment for building consensus is over, said Bhoola, owner of Elite Hospitality, which runs the Hilton Garden Inn and Holiday Inn Express on International Speedway Boulevard.

“There are a lot of questions about motive and integrity,” Bhoola wrote in an email Thursday. “Or perhaps the Taj Mahal (Ocean Center) that got built will get even more of the hotels’ bed taxes that only support a few hotels.”

Doran is optimistic they’ll be able to get things done. On his agenda for Monday is a list of potential candidates that could run the authority as interim president for 90 days until Kersey’s replacement is hired. Doran said he hopes the board can discuss the candidates and select one during the meeting.

But, on the issue that was the last straw for Kersey’s firing, the board members did finally reach consensus Wednesday. Board members agreed the community needs to woo the Shriners to Daytona Beach in 2017. They plan a meeting with community leaders in September.

“We do need to put our best foot forward and let them know how much we love them and how much we want them here,” Larkin said.