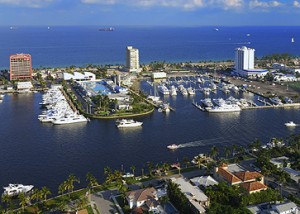 Steve’s breakdown: As we reported last month, there’s money to be made from gay marriage tourism. And here’s an account that was created completely by the new law in New York. Is this a lead? Absolutely! Especially for an agency in Fort Lauderdale with connections in NYC. But it’s also a reminder to always keep your eye open for new opportunities that arise from major market shifts.

This week, they stepped up efforts to promote Fort Lauderdale as a honeymoon destination for same-sex couples from New York.

“This is a great opportunity,” said Richard Grey, the owner of the Royal Palms Resorts and Spa. The 50-room luxury hotel, whose clients are exclusively gay men, launched the Royal Bliss honeymoon package on Monday.

For $6,400 the Royal Palms will treat guests to a six-day vacation that includes limo pick up at the airport, spa treatments and champagne lunches by the pool.

Some of Gray’s local competitors are also promoting honeymoon packages that celebrate gay marriage in New York. The Preferred Pride package at the Atlantic Resort and Spa offers oceanfront rooms starting at $159 per night.

Hotels are not the only businesses seeking to profit from the hundreds of daily wedding celebrations that began to take place in New York on Sunday.

Wedding planners, cake bakers and jewelry makers in New York City and throughout the state, have already reported healthy trade.

But Fort Lauderdale is one of the first cities outside New York State, to try to cash in on the Marriage Equality Act.

On Sunday its tourism bureau placed an ad in the style section of the New York Times.

“After Your I Do’s Consider Our Proposal,” it said, encouraging readers to visit the city’s official visitors site, for the chance to win a free Fort Lauderdale honeymoon.

The move underscores the importance of gay travelers – and New York tourists – to Fort Lauderdale. The city of 165,000 has more than 30 guesthouses that cater to homosexual visitors, and a vibrant gay community centered in Wilton Manors. There is also a large population of retired New Yorkers.

“Most hotels have a romantic package (for same-sex couples) of sorts,” said Jessica Taylor, a spokeswoman for the Greater Fort Lauderdale Convention Center and Visitors Bureau. “With the fact that a large part of our customer base comes from New York, this is a great opportunity.”

Local tourism officials estimate the city hosted 1 million gay travelers in 2010. New York to Fort Lauderdale is the busiest air route in the country with more than 8.5 million passengers per year.

Combs said some hotels in these cities are making the effort to celebrate gay relationships just like they celebrate heterosexual weddings. They picture homosexual couples in ads and teach staff to cater to the needs of LGBT couples, avoiding awkward moments when a same-sex couple checks in.

Combs’s firm, Witeck-Combs Communications, conducted a nationwide survey of gay households with Harris Interactive earlier this year. It found 65 percent of gay and lesbian adults planned to take a leisure trip this summer.

Cities most likely to attract gay honeymooners, Combs said, are those where there is a tolerant atmosphere.

“A simple act of holding a hand for a gay couple can be viewed as inappropriate” he said.

“When you celebrate something as momentous as a honeymoon, you want to make sure you are free to enjoy who you are, without any fear of stress, or any kind of repercussions, because you’re trying to express your love and affection for your significant other.” he said.

David Paisley, an analyst for Community Marketing Inc, predicts that New York City will be the top honeymoon destination for LGBT couples from other parts of the United States.

“It’s the place that’s been number one (on the rankings) for a decade,” Paisley said. “The fact that people can get married in New York now and have their honeymoon there is very attractive.”