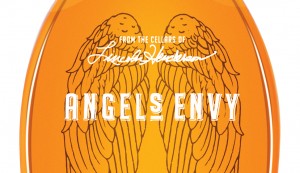 Steve’s breakdown: This master distiller had a long career at Brown-Forman so he knows how to make and build a bourbon brand. And this one is already in 8 states and counting. Former or present Brown-Forman agencies are highly encouraged to contact this distillery.

LOUISVILLE, KY: In the downstairs atrium at 21c Museum Hotel, well-dressed men and women crunched on precarious lattices of Parmesan cheese and sipped bourbon-based cocktails with such names as the Butchertown, the John Lemon and Fourth Street Fizz.

The spring event was the official launch of Angel’s Envy, a small-batch bourbon produced by a new craft distiller, the Louisville Distilling Co. Angel’s Envy is a distiller’s pun — the whiskey that evaporates from the barrel during the aging process traditionally is called the angels’ share. This bourbon’s name suggests the angels wanted more.

A distinguished-looking man in a dark suit with a tidy white goatee and a wry smile made his way through the crowd, shaking hands and chatting. He was Lincoln Henderson, former master distiller for Brown-Forman Corp., whose name is emblazoned on the front of the bourbon’s curvaceous bottle.

Henderson, 72, has an impressive résumé and a following among whiskey watchers — during a long career at Brown-Forman he helped develop Woodford Reserve. He’s also a member of the bourbon hall of fame, administered by the Kentucky Distillers’ Association.

Angel’s Envy has been performing well in the half-year it has been on the shelves, according to Stacy Lauter, Kentucky division manager for Republic National Distributing Co., which also handles Brown-Forman’s brands. “I’ve never seen a bourbon take off as quickly or with the velocity that this has, especially with something over $40,” he said.

Lauter attributes the label’s success to Henderson’s reputation. “When they know Lincoln, and what he’s done, and they learn that this is his new project — it’s a no brainer.”

Henderson’s son, Wesley, started the company about six years ago in an attempt to lure his father out of retirement and involve his own sons in the family business (He has six.).

“I wanted to see dad get into an expressive environment, and for us to do this on a scale where if we figure out that we could ferment sweat socks tomorrow and come up with a wonderful distillate, then by God we can do it,” Wesley Henderson said.

“We don’t have to go through three or four committees” to try something new, Lincoln Henderson said.

The first batch of Angel’s Envy was made on the equipment of a local distillery, but Wesley Henderson is in negotiations to set up an operation of their own. The distillery would be open to the public for tours.

“I think it’s something that the city needs. You’ve got the bourbon trail surrounding us,” he said. “Rural Kentucky has kind of taken that history and made it theirs.”

“Louisville should have had this a long time ago,” said Michael Veach, associate curator for special collections at the Filson Historical Society and a historian of bourbon.

An Army brat, Lincoln Henderson describes his childhood as rootless. He began serious study of bourbon as an undergrad in Oklahoma.

“I’ll never forget, we were having Christmas break and I couldn’t go home, so we decided to do research on bourbon,” he said. “We drove down to Texas, because Oklahoma was dry, and we bought about five cases of bourbon. I think we spent our whole three weeks of Christmas break with Ancient Age.”

Whether or not it ever really happened, the epic bender didn’t have anything to do with his eventual career at Brown-Forman, where he was master distiller for 39 years before retiring in 2004.

In fact, Lincoln Henderson was on the pre-med track as an undergrad, and was set to attend medical school at the University of Louisville. But when his father passed away at the end of his senior year, he decided to put his medical training on hold and got a job as a grain chemist at Brown-Forman.

As it happened, his science training was fine preparation for a career in distilling — even if he hadn’t shown any particular interest in bourbon beyond that Ancient Age research.

Lincoln Henderson rose through the ranks at Brown-Forman, eventually becoming master distiller. Besides knowing his way around a fermentation reaction, he also had to develop his sense of taste — part of his job as master distiller involved maintaining the flavor profiles of the company’s flagship brands, including Old Forester.

But Lincoln Henderson demurred when asked about his sensitive palate. “I have a good imagination,” he said.

Still, he acknowledged that his interest in flavor led to some uncomfortable evenings around the dinner table when he would refuse to eat his vegetables. “But I finally realized that’s not the way to be acceptable in society, especially with your wife,” Lincoln Henderson said. “Oh, it smells like crap, I’m not eating this salad.”

In the 1990s, he helped launch Woodford Reserve — but first he had to learn how to make bourbon in a pot still, a distilling technique that had died out in Kentucky under Prohibition. He also experimented with new spirits and methods at Brown-Forman, such as finishing whiskey in barrels formerly used for sherry, rum, brandy — and port.

“If anybody sat down and spent 25 minutes talking with him, they could learn more about whiskey than they could anywhere else,” said Veach, the bourbon historian.

“I’m not a big fan of wine-finished bourbons myself, but the way he’s done this is exceptional,” Veach said. “The port really doesn’t show up until the finish.”

Henderson said that he aimed to make a whiskey that was more subtle than Brown-Forman’s brands, in part to appeal to non-bourbon drinkers.

“If you look at Old Forester, which was Brown-Forman’s original whiskey — I had to live and breathe by that thing — and Woodford, these are very bold whiskeys. You’ve got to have a lot of flavor, a lot of oak,” he said.

“If you talk to a lot of people, they’ll say it’s got too much. I found this out in Germany, in the UK, essentially around the world, that bourbon was just too much for people. I was thinking we need to do something that’s more subtle.”

Besides the flavor profile, the marketing campaign for Angel’s Envy is designed to appeal to the high-end liquor consumer, the kind of person who knows their super-premium vodka and tequila. The whole pitch for Angel’s Envy — from Lincoln Henderson’s signature on the shapely bottle to the distiller’s expression that gave rise to the bourbon’s name — reflects a carefully crafted storyline.

“They want to take ownership in the brand,” Wesley Henderson said of high-end whiskey drinkers. “They want to know the history.”

The idea that marketing bourbon is largely a matter of storytelling — and that the story starts with Kentucky’s limestone geology and ends with six months in port barrels — is the reason that Lincoln Henderson has been traveling to the handful of markets where Angel’s Envy is available, making appearances and giving talks to bourbon aficionados. He calls it “hand-selling,” and it’s something he often did with Brown-Forman, representing the brands to European and Japanese consumers thirsty for authenticity.

“My knowledge and experience with the single-malt drinkers and the super-premium drinkers (is) these people want you to be their friend and to talk to them about how this whiskey is made,” Lincoln Henderson said. “To me, that’s fun. They want you to tell them all the intricacies in the whiskey, how it’s made, how it matures, all the nuances.”

Earlier this month, three generations of Hendersons — Lincoln, Wesley and Kyle — were at the back of a large warehouse in Bardstown, overseeing the decanting of Angel’s Envy from bourbon barrels into the ruby port barrels for its finish.

Kyle Henderson loosened the poplar bung sealing each barrel. An employee then picked up the barrels with a forklift and positioned them over a trough, into which they emptied the contents. A hose connected to a pump carried the whiskey to the waiting port barrels, where it will finish for six months, or until Lincoln Henderson agrees that it’s ready.

The details are mystifying for the uninitiated, but part of Lincoln Henderson’s plan for Angel’s Envy is to pass along this specialized knowledge to his grandson. Kyle Henderson is studying biochemistry at the University of Louisville and hopes to learn from his grandfather on the job.

“He’s had decades to develop his palette — that’s the challenge for me,” Kyle Henderson said. “I know some of the science behind it, but knowing the science and having the taste are completely different things.”

“It’ll be a few decades before I’ll be a master distiller,” he said. But he’s learning from the best.