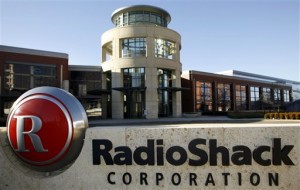 Steve’s breakdown: Though there wasn’t much fanfare, the new CEO of RadioShack did announce some big plans to expand the signature assortment, improve in-store presentation and increase spending on targeted marketing. And since he is a financial guy, he might need a little guidance on that last one.

Then the 43-year-old Gooch gave a glowing rundown on the Fort Worth corporation’s turnaround, noting double-digit bottom line growth, new tie-ins with Apple and T-Mobile as well as upcoming cellphone kiosks in Target stores. Without giving specifics, Gooch said talks were under way with other retail chains for RadioShack to operate their electronics areas.

“We are everywhere,” he said in a nearly empty room at the Norris Conference Center. “There is no major market where we don’t have a presence.” He said RadioShack’s vast network of 4,675 company-owned stores and more than 1,100 independent dealers give the chain “unparalleled consumer reach.”

Gaining the T-Mobile connection for its own stores and Verizon in the Target kiosks was described as a major turning point — transforming RadioShack into an “agnostic, multi-carrier” provider of prepaid and subscription cellphone services, the new CEO said. Mobile sales have become a bigger slice of the company’s revenue pie, growing from 29 percent in 2008 to 47 percent last year, said Gooch, who was named president this year.

RadioShack plans to expand the signature assortment, improve in-store presentation and increase spending on targeted marketing, he said. This sector accounts for 30 percent of revenue. Already, stores have new assortments of tablets and accessories and the company plans to more deliberately appeal to do-it-yourselfers who buy parts and components, said Molly Salky, vice present of investor relations.

As for consumer electronics, which generates 23 percent of revenue but less than 10 percent of gross profits, Gooch said products sold in this declining sector would be used “opportunistically” to drive traffic to stores. He cited no examples of how that might be done.

The new CEO also expects to see growth in its network of overseas franchised operations — more than 200 stores in 32 countries.

The only shareholder question came from Jim Brye, a fellow native Michigander and a RadioShack independent dealer, who asked Gooch about persistent takeover rumors.

Gooch said such loose talk reflected the state of the market, but he couldn’t comment.

“I was surprised no one was here,” said Brye, who traveled to North Texas to attend the meeting and visit his grandchildren in North Richland Hills. “I expected 200 or 300 people.”

So few showed up that the entire group could easily have been accommodated in the small Starbucks coffee shop a block away.

Nonetheless, the 67-year-old dealer said he was impressed by Gooch’s presentation and has greatly enjoyed running his RadioShack store since leaving a career with Prudential Financial 12 years ago.

Gooch gave no indication how he will manage RadioShack differently from Day, who rarely held teleconferences with stock analysts and was barely visible in a community where the company had been the leading corporate patron for decades. Feehan said Gooch may consider more sessions with analysts.

Salky said that Gooch has flown around the country during the past two weeks to build rapport with district managers and regional sales directors. The more than a dozen “road shows” will continue over the next month, she said.

Gooch joined RadioShack as chief financial officer in 2006, shortly after Day was named CEO. He worked with Day previously at Kmart and its successor company, Sears Holding.

Considered a number-crunching whiz since childhood, Gooch studied accounting at Michigan State University, then earned an MBA at Northwestern University’s Kellogg School of Management. Before Kmart, he worked for Helene Curtis and Quaker Oats. And just before joining RadioShack, he was executive vice president and CFO of Entertainment Publications, a discount coupon publisher, in Michigan.

With the promotion, Gooch’s base salary rises to $850,000 from $609,000; Day earned $1 million. According to a federal securities filing, performance bonuses can raise the amount. Last year, his total compensation including options and deferred income was $2.8 million, compared with Day’s $4.9 million, the proxy said.

Gooch, who shares an 8,000-square-foot home in Southlake with his wife and two children, grew up in Grand Blanc, Mich., a town of 7,500 near Flint. His mother was a school evaluator and his father, a math teacher, earned notoriety by coaching a number of state championship basketball teams.

“I knew he was under immense pressure at Kmart, but he handles the situation like he plays golf — with a high level of confidence,” said one of the former teammates, Scott Sassack, who still lives in Michigan. “When Jim’s before a tough shot, he’s got it figured out.”