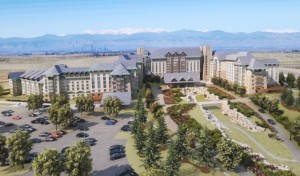 Steve’s breakdown: A real estate project like this is huge and requires a lot of marketing to many different targets. Give Gaylord Entertainment a call in Nashville to get the details on the account.

AURORA, CO: Aurora snagged a deal Monday for a luxurious, $800 million Western-style convention hotel to be erected near Denver International Airport, and some Denver officials anticipate losing sales tax revenue to a hotel they say will be in the middle of nowhere.

Aurora City Council members approved an incentive package worth up to $300 million for Nashville, Tenn.-based Gaylord Entertainment Co. to build the hotel, which will feature 1,500 rooms, more than 400,000 square feet of exhibition and conference space, and panoramic views of the Rocky Mountains.

The Gaylord Resort and Convention Center is being constructed whether Denver’s National Western Stock Show Complex moves to the property adjacent to the hotel in Denver territory.

Mayor Ed Tauer in a Tuesday press conference likened the project’s significance and impact to the formation of the Colorado Rockies franchise. “If you’re lucky in your life and in your career, you’re going to get to be a part of something that’s truly special, something you’re going to get to look back on and say, ‘This is unique, it’s truly an addition, and it’s something that is going to make a difference for generations,’” Tauer said. “This is one of those truly unique, once-in-a-lifetime opportunities.”

About 1,900 jobs will be created through construction, and once the hotel is open it is estimated to employ up to 1,800 permanent, on-site jobs and about 3,200 direct and indirect jobs. The city of Aurora is expected to realize a $5-billion impact over 30 years.

Gaylord has agreed not to use “Denver” in the name of the hotel, which will sit on 85 acres of land near East 64th Avenue and Tower Road in Adams County. Greeley-based Hensel Phelps Construction Co. is expected to break ground on the facility by late 2012 and the resort is expected to be open by late 2015.

A coup for Aurora, not for Denver

Striking a deal to build this project in Aurora territory is a feat for Mayor Ed Tauer, who is term-limited this year, but he said there’s no sentiment of competition between Aurora and Denver. “It’s not really us versus one of our neighbors,” Tauer said.

But Denver City Councilman Doug Linkhart can’t help but be concerned about how this new destination will impact Denver’s bottom line. “I’m leery of the Gaylord style of building complexes far from central cities that bleed away energy from the city,” Linkhart said. He says he’s unsure whether a project of this magnitude should be located near the airport, away from the core of both Denver and Aurora.

“This particular location is not close to anything,” said Linkhart, co-chairman of Denver City Council’s Business Workforce and Sustainability Committee. “I’m not saying put it into downtown Denver but I’m just saying if we’re going to create an activity center outside of Denver and Aurora proper, let’s be smart about having them clustered instead of all spread out.”

Constructing this massive hotel might bring Aurora more sales tax revenue, but it might not be the best use of land, he said.

“I don’t think anyone should be looking at simply raising money,” Linkhart said. “I think we ought to be looking at helping local businesses and doing what’s wise from a land use standpoint and not just building more sales tax engines.”

One of Linkhart’s biggest worries is that a hotel with a large conference and exhibition space would steal visitors away from the Denver Convention Center, and the surrounding Denver businesses and restaurants would lose visitor traffic.

But Colin Reed, chief executive officer of Gaylord Entertainment, said Denver shouldn’t be concerned that this project will “cannibalize” the market.

“The downtown convention center in Denver should not be worried about what we’re doing here in Aurora,” he said.

Tauer was adamant that the Gaylord hotel project be viewed separate from the National Western Stock Show complex, which has been looking to relocate to a parcel of land that would end up being adjacent to the convention hotel. But Denver City Council has not yet approved that move.

“Gaylord and the stock show have been talking for a while about cooperating, and if that works out for them we think that’s a great idea.”

If that were to happen, the economic and tourism benefits for Aurora would be vast, said Reed.

“There’s a tremendous synergy here if we can make it work,” he said. “We’re committed to trying to figure out whether we can have them as our neighbor.”

Linkhart says Denver City Council members would likely favor the stock show’s move to a location somewhat near Aurora’s new hotel, but how close it should be to the hotel is still up for debate.

“They don’t have room to expand where they are and we’d like to keep them in Denver,” he said. “I think it’s just a hard reality that we have to face that the stock show is going to go somewhere. But this particular site might not be the ideal location.”

The construction of a new hotel might be a huge economic advantage for Aurora and out-of-towners but the average Aurora resident doesn’t get a say in whether this type of development should be built. And that’s alright, says Rich McLean, parishioner at St. Therese Catholic Church in Aurora. McLean says it’s an elected official’s job to make these kinds of decisions and his gut instinct says it shouldn’t have gone to the voters.

“If they thought this was going to be the best thing for Aurora then I expect them to go ahead and go for it,” McLean said. “This is why we elect these leaders, we expect them to be knowledgeable and be conscientious about the best interests of Aurora.”

Putting this question to the voters would have slowed the momentum down immensely, said Steve Hogan, former Aurora City Councilman and current mayoral candidate.

“Unfortunately those kinds of things can get distorted in political campaigns,” he said. “This is exactly the kind of thing that our economic development people, our mayor, and our city council people are charged to do.”

The hotel’s target audience isn’t Aurora residents like McLean. Hogan envisions the new hotel to be a place where those passing through DIA can stay, and a destination for business conferences. He anticipates the hotel to be more luxurious than the current hotels in Aurora, which are mostly centered in the heart of the city.

“The city has in existence right now a couple of other conference facilities not nearly as nice or not nearly as high class,” he said. “(The new hotel) is probably not going to be used by most of the citizens of Aurora other than maybe to go up there, rent a room and have a good time for a weekend.”

When Gary Wheat heard the news that the Western-themed hotel was coming to Aurora, he said he felt “like a kid on Christmas morning.”

Wheat, the executive director of Visit Aurora, the nonprofit destination marketing organization launched by the city last year, says the hotel will be a boon to the city.

“From the standpoint of the brand that Gaylord brings, their identity their visibility and their draw to a destination is amazing,” he said.” This is going to be a real crown jewel for what we do at the destination marketing organization.”

The hotel will be located on 85 acres of land in LNR Property’s High Point Master Plan Development near DIA, which will include a retail town center, restaurants, new homes and open space. In addition to the hotel, Gaylord Entertainment’s concept site plan details space for a convention center, outdoor event space, a children’s playground, a large parking area, a future water park, several gardens and an outdoor fireplace.

Several projects have been discussed in recent years for the undeveloped land in north and east Aurora, including two plans for massive race track facilities and another for a $1.5-billion housing and commercial development. Wendy Mitchell, executive director of the Aurora Economic Development Council, said she doesn’t think the Gaylord project will mean much for the other plans in northeast Aurora. “I don’t think its going to do anything to those projects. They are very different,” she said. But, Mitchell said, the project will attract other businesses to the area near the hotel.

Under the financial incentive package that Aurora City Council members approved Monday, the city pledges to collect almost all of the new taxes generated by the Gaylord Resort and Convention Center and reinvest them into the project. The city also hopes to score additional funding from the Regional Tourism Act. In addition, the package delineates that any fee increases imposed by Aurora Water will be paid with money from the city’s General Fund.

Gaylord was named the 2011 “Best Places to Work” winner in the Nashville Business Journal, as well as more than 15 similar awards.