We All Saw This Category Catastrophe Coming

Home Blood in the WaterWe All Saw This Category Catastrophe Coming

We All Saw This Category Catastrophe Coming

Steve’s breakdown: Princess Cruises has got a big problem with their Diamond Princess. It is now the most contaminated place on earth with COVIT-19.

Folks, this is not going to end soon. Whether it’s this virus or the gastrointestinal illnesses Princess Cruises’ passengers got from being on their Caribbean Princess ship. This whole category has got big problems and whether it’s agencies coming up with new kinds of offering these companies can sell or just better communication at all levels, something has to happen.

Up to the challenge? Might as well start with the Santa Clarita, CA based Princess Cruises. Jan Swartz is the President

JAPAN: With a total of 531 crew and seafarers, Filipinos make up half the staff of the Diamond Princess cruise ship that is quarantined in Japan‘s Yokohama port because of the coronavirus, and as the illness spreads, they are becoming increasingly worried.

On Thursday, health authorities in Japan said 44 more people had been confirmed with the infection, bringing the total to at least 218 passengers and crew, as well as one quarantine officer.

Among those crew who are infected, at least 11 of them are Filipinos, according to the Philippine government, raising alarm among family members back home, as well as fellow crew members who continue to work under quarantine conditions.

The nationalities of at least four other sick crew members remained unknown as of Thursday.

While news reports are focused mostly on the 2,670 passengers of the ill-fated ship, its 1,100 crew members are on the front line, as they race against time to contain the spread of the virus inside the ship, keeping the vessel clean, while continuing to serve the passengers who have been confined mostly to their cabins.

In a social media post, Leigh Antonette Barruga from the Philippines said her brother, Paolo, is a crew member of Diamond Princess, and that her family is “heavily distressed” over the situation.

“What we can ask right now is for prayers, and to ensure the safety of the crew members and hopefully, receive medical attention,” she said.

“Their situation on the ship stresses them out and that could cause their immune system to weaken making them more vulnerable to the virus,” Yu added. “We’re desperately seeking your help. Please let them go back to their families and loved ones. It would put our minds at ease if you would just kindly let them go back home.”

Al Jazeera reached out to Paolo, as well as several other crew members, but they did not respond to requests for interviews.

According to his social media account, he started working for Princess Cruises, which operates Diamond Princess, in October 2018.

‘I want him to stay alive’

The 115,000-tonne ship has been docked in the Japanese port city of Yokohama since February 6, after it was reported that an 80-year-old man, who had disembarked a few days before in Hong Kong, had tested positive for the virus. At least 10 people were initially infected before it spread to other passengers and crew.

In China, more than 1,300 people have died from the virus, with about 60,000 confirmed infections as of Wednesday.

Mary Grace Magsaysay, also from the Philippines, posted online that her husband, Elmer Magsaysay, was working as a chef on the quarantined ship.

“It’s getting worse,” she wrote after reading news about more people inside the ship getting infected.

Another spouse of a Diamond Princess staff member said she was worried about her husband’s situation because he is close to one of five Filipino crew members, who have tested positive for the virus.

In a separate message to Al Jazeera, the woman, who asked not to be identified, said she wanted the cruise ship company to allow her husband to leave the ship.

“I don’t care if he loses his job, the most important thing is that he will stay alive.”

All the patients who have tested positive for the virus have been taken off the liner, and placed in quarantine in a Japanese hospital.

Meanwhile, a Filipino crew member told the Philippine television channel, GMA, that they were being taken care of by the Japanese government and the cruise company.

The employee, who asked not to be identified, sent photos from inside the cruise ship showing Filipino crew members wearing surgical masks and gloves while delivering food to passengers. However, they were not wearing hazmat suits and other protective equipment, unlike the Japanese health officials who entered the ship to carry out the coronavirus tests.

In a brief statement, the Philippine embassy in Japan said it is “currently working with both Philippine and Japanese Government agencies to provide assistance to all Filipinos onboard the cruise ship”. 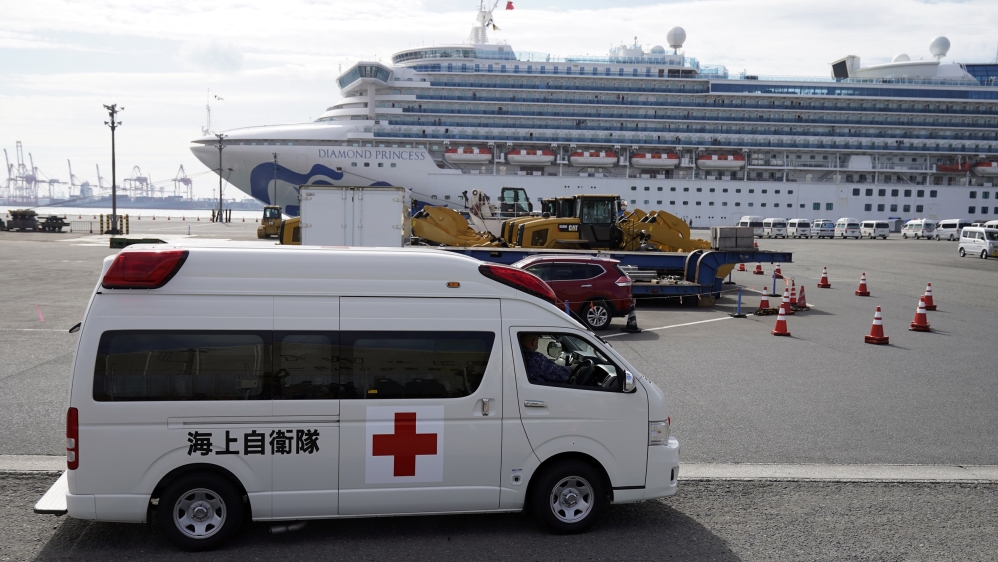 The Manila-based Magsaysay Maritime Corporation, which is responsible for recruiting Filipinos to the crew, assured those working on the Diamond Princess that the company remained in touch with the cruise operator to ensure their safety, in a video released online. It later switched the video to private, restricting public access.

There are also an estimated 160 Indian nationals working on board the Diamond Princess, and some have pleaded to Prime Minister Narendra Modi to “rescue” them from the ship.

In one of a series of videos posted online, Binay Kumar Sarkar was joined by five of his colleagues as they called on their government to allow them to leave the ship before they got infected with the virus.

“Please save at least those of us who are healthy,” he said.

‘Ship is the safest place for quarantine’

But Dr Abdul Ghafur, an infectious disease specialist based in the Indian city of Chennai, said placing the passengers and crew under quarantine inside the ship was “the safest way” to contain the infection. 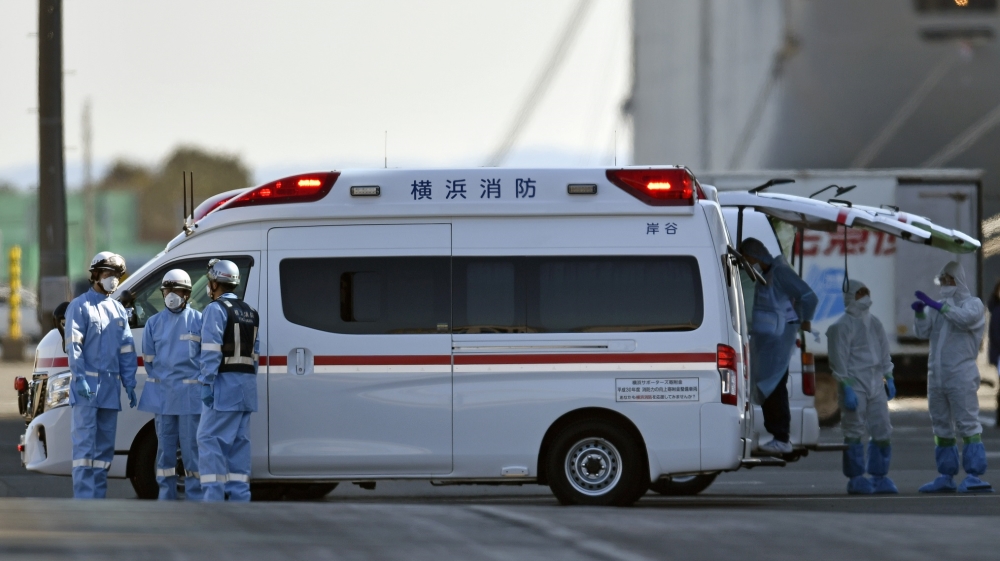 According to latest media reports, 218 passengers of the Diamond Princess cruise ship and one quarantine official have tested positive for the novel coronavirus [Franck Robichon/EPA]

“Even if you bring them outside the ship for quarantine, still they will be enclosed in one building,” he said.

As to the continued increase in the number of infections inside the ship, Ghafur said the virus may have already been incubating for several days, and that many of the patients were only now beginning to show symptoms.

Given the enclosed nature of the cruise ship, numerous cross-transmissions may have already happened before the first cases were confirmed, he said.

Those who remain in the ship for the 14-day quarantine are allowed to stroll outside their cabin but are required to wear surgical masks and maintain a six-foot (1.8 metres) distance from other passengers. However, families inside the ship were seen interacting with each other at close range without any protective gear.

In a statement, Jan Swartz, Princess Cruises president, said, the company was working with the Japanese government “on additional enhancements, approving new procedures as we adapt our process to the unique challenges of this situation”. 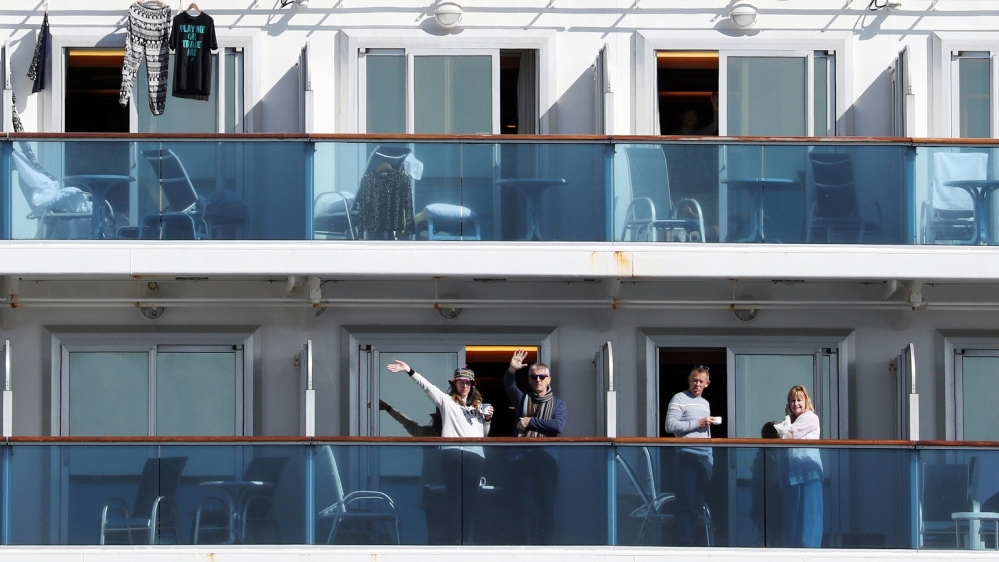 The Diamond Princess cruise ship reported 2,670 passengers and 1,100 crew on board the ship before it was forced to dock in Yokohama on February 6 [Jiji Press via EPA]

In a separate video posted online, Swartz said “emergency and public health protocols that are in place” in their ships “are world-class” and have been developed with the help of the World Health Organization (WHO) and the US Centers for Disease Control and Prevention.

The statement did not address what will happen to the crew members who have requested to leave the ship.

Another cruise ship, the MS Westerdam, arrived in the Cambodian port of Sihanoukville early on Thursday, after being turned away by five countries over fears that the people on board might have been infected with the coronavirus.

Earlier this week, some 3,600 passengers and crew of the World Dream cruise ship were allowed to disembark in Hong Kong, after a similar scare. The ship was earlier turned away by Taiwan.